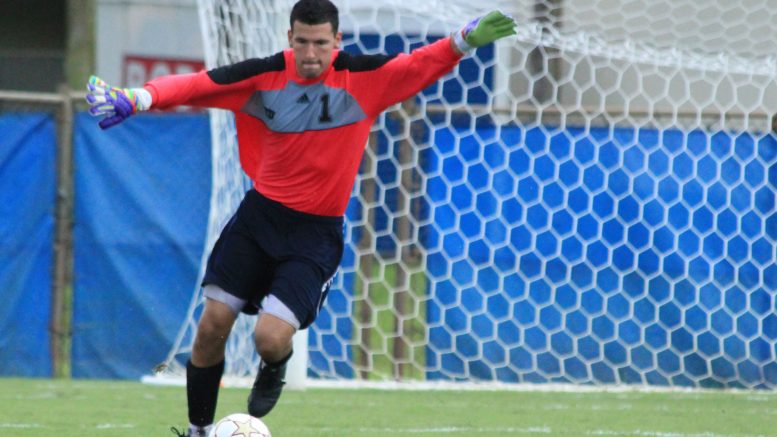 FIU Goalkeeper Eric Reyes has had an interesting journey on his way to becoming a Golden Panther.

Reyes’ journey began one year ago out in the Golden State, playing for the University of California-Santa Barbara.

Although no longer a member of the Gauchos soccer team, a program that he calls “a first class organization,” Reyes is grateful for having had the opportunity to play on the West Coast.

“An unbelievable opportunity to play for arguably the best team in the nation in the biggest college soccer stadium in the country,” said Reyes.

After playing in Calif.,  the opportunity to represent his country of Puerto Rico in a FIFA World Cup qualifying match was just another outstanding accomplishment to add to his resume.

“Seeing all these professional players on the field playing with and against me, that I see on TV, was quite interesting,” said Reyes.

Reyes had no idea he was being watched from across the country. Head coach Munga Eketebi said, “I knew him since he was playing in the under-seventeen national program.”

When asked why he chose to transfer to FIU, Reyes noted the program’s history of success, including a trip to the Division-I championship game in 1996.

“This program has such a rich tradition of winning and players successfully getting to the next level,” Reyes said.

FIU’s rich program history was not his only reason for coming to Miami.

A South Florida native and former resident of Pembroke Pines, Reyes said that the prospect of coming closer to home was a welcomed change.

“Obviously, being from Miami helped us in recruiting Eric. I guess after being out west, he felt homesick and wanted to come back to Miami, which turned out to be a blessing for us,” said Eketebi.

“I’m back home where my family can watch me play, I can eat a home-cooked meal every now-and-then, and I can be with my loved ones when needed,” Reyes said. “At the end of the day, I’ve traveled many places throughout the nation and worldwide, and to this day, I still say there is no place like South Florida.”

“Shane was a very good leader, who organized the back of the field well and was a tremendous shot-stopper,” Reyes said.

“Eric has stepped in and gotten it done,” said Eketebi. “It seems like the only challenge for him is staying healthy for every game.”

Reyes acknowledged the task ahead of him and has all the confidence that he and the rest of his Golden Panther backfield need to rejuvenate the FIU men’s soccer program and bring it back to where it was during its championship years.

The team is looking to make the best out of their conference play with their tough Conference USA schedule.

After suffering a heart breaking loss in double overtime to begin conference play, Reyes looks to be the focal point of the Golden Panthers’ turn around this year. Reyes has a 67 percent save percentage on the season, including one shutout against South Florida rival Nova Southeastern University.

With the rest of the season still lying ahead, Reyes has surprisingly high expectations for where this team can go and believes that they are not far off from attaining them.

“If we take care of our game and do the simple things right, play solid defense, and finish our chances up top, FIU soccer fans will be in for an amazing conference tournament,” Reyes said. “And possibly an NCAA tournament run.”

Despite early goal, FIU not able to upset No. 15 Ohio State

Whistleblowers speak the truth, inspire students to be government watchdogs