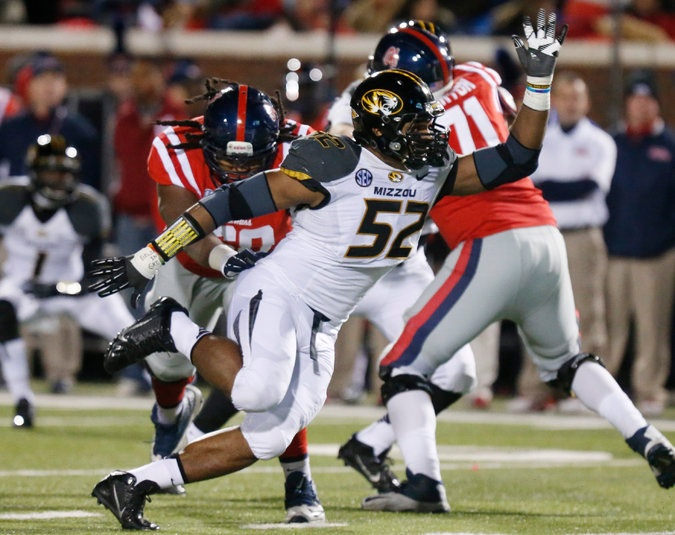 Michael Sam announced that he is a gay man with aspirations of playing in the NFL. Photo courtesy of mmtzjr69out/Creative Commons.

April 15, 1947 is a date known as the most historical moment in the world of sports. On that day baseball hall of famer Jackie Robinson broke the color barrier by becoming the first African American to play major league baseball. Fast forward almost 67 years later and the date Feb. 9, 2014 will go down in sports history as well.

On Feb. 9, a young man by the name of Michael Sam told the world that he was a gay man. In today’s age hearing something like that comes as no surprise, what is surprising is the fact that Sam was a defensive end for the University of Missouri Tigers football team. That’s right, a football player came out and told the world that he was a proud gay man.

The acceptance of homosexuality in sports is still an issue, but we are slowly but surely making big strides to change that. I found myself hanging out with some friends when I first came across the news and couldn’t help but think to myself: it’s about time.

The fact that we as a society can’t embrace the lifestyle of a gay person’s life is simply outrageous. Granted some people may have religious beliefs or just simply don’t agree with that lifestyle and that is understandable. However, to treat homosexuals as anything less than another human being is simply gut wrenching.

In sports we embraced when Robinson broke the color barrier, we were inspired when two 19 year olds from a small village in India were given a chance to play in the MLB. However, we were sickened and disturbed when basketball player Jason Collins announced that he was gay, making him the first active player in the NBA to do so? Something there just doesn’t add up if you ask me.

In a sport that has been called “deadly” or even known as a “gladiator” sport to think that a gay male would ever come out or even play was thought to be ridiculous. Even players who were gay kept silent for fear of losing their job or becoming outcast in the locker room but not Sam.

Sam is an All-American defensive lineman, he was voted AP’s Southeastern Conference co-Defensive Player of the Year and collected 48 tackles, 11.5 sacks, 19 tackles for loss and two forced fumbles his senior season.

In an interview with ESPN Outside the Lines, Sam indicated just how openly he felt about his lifestyle and the sport that he plays.

“I’ve come here to tell the world that I am an openly proud gay man,” Sam said. “This is something that I’ve known for a while to me this is just telling another person ‘hey I’m gay’ it shouldn’t be a big problem.”

Sam also understands the historical pressure that his announcement has on not just himself but for future generations of gay athletes.

“I understand just how big this is because this is a big deal,” Sam said. “Nobody has done this before and it’s a nervous process but I know what I want to be and that’s a NFL player.”

For years we have been programed to think that football is a “man’s” sport and that only the toughest of the tough can compete. Yet, when Sam made his announcement we as a society couldn’t expect the fact that for four years a gay man was not only playing football but playing the game at a high level. This stigma or serotyping of gay athletes needs to come to an end, we have seen in the past that gay athletes can not only play but compete at higher levels than some athletes who are straight.

Many people feel that Sam will not be able to stand or be expected into a NFL locker room but I have a hard time understanding this. Yes, we may have found out about Sam being gay on February 9 but he had told his entire team at Missouri months before. For months not only were their no issues, in fact the team came together to protect and help out Sam in his times of need.

“Michael is a great example of just how important it is to be respectful of others, he’s taught a lot of people hear first-hand that it doesn’t matter what your background is, or your personal orientation, we’re all on the same team and we all support each other,” Missouri Head coach Gary Pinkel said in an interview with ESPN. “If Michael doesn’t have the support of his teammates like he did this past year, I don’t think there’s any way he has the type of season he put together.

This is a locker room filled with young men that are ages 17 to 22 and they show this much maturity. Yet your telling me that when Sam goes to the NFL in a locker room that’s has men in their 30s that they will act less mature than a college locker room? I’m not buying that I’m sorry, yes Sam will face individuals and players who are strongly against his lifestyle but to say that an entire league will not accept him is just idiotic.

The fact is that we live in a world where people and ideas of lifestyles are changing every day. 67 years ago we believed that African Americans couldn’t play sports because it was a white man’s game. 67 years ago it took the courage of one man to say no and continue to push for not just himself but for a whole group. Sam now finds himself walking in the same footsteps of Robinson all those years ago and I hope, for not just his sake but for the sake of an entire group of people, that we as a society and embrace the courage and power that this young man has shown the world.

Humanity is calling for a change

Transferring to FIU is Daunting, But Worth It