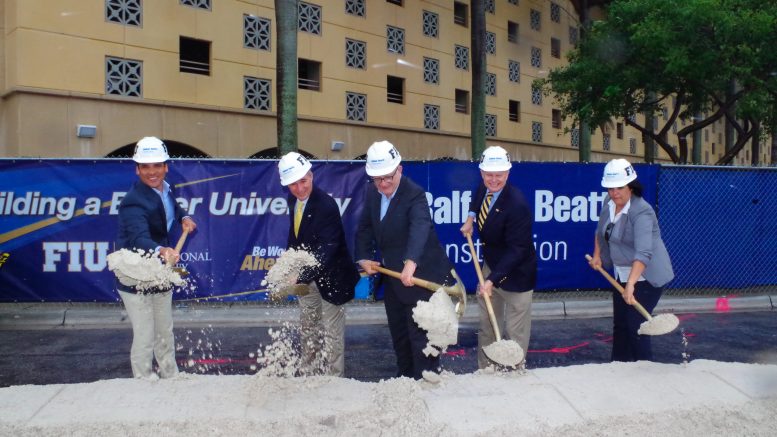 After years of planning and delays, the Student Academic Support Center got its official groundbreaking.

Fighting wind and rain on Friday, Nov. 21, the university staff and distinguished guests, highlighted by University President Mark B. Rosenberg, were able to bear the weather long enough for necessary speeches to be given and media pictures be taken.

“This ceremony is evidence of the fact that rain or shine, up or down, over or under we’re going to get it done,” said Rosenberg. “That’s in our DNA.”

The 74,000-square foot Student Academic Support Center, scheduled to open in the spring of 2016, will be the one-stop building for all student financial and academic needs—the first building that incoming students will see and use most throughout their academic career.

The SASC will house departments such as enrollment services, one stop, financial aid, advising, honors college, graduate studies and study abroad, just to name a few.

The $31 million building, that will be located east of GC next to Barnes and Noble and previously the bus lane, will be state of the art, encompassing features such as Wi-Fi, computers, technology hubs and charging stations for students to be as productive outside the classroom as they are inside. It will also have four general-use classrooms which will be the home of the $1.5 million UTEACH program for STEM instruction, and will be outfitted with a robust 250-seat auditorium, slated to be the largest on campus, that will be used for academic services as well as orientation and special events.

With the SASC designed to co-locate departments which work together, it will also increase efficiency and productivity as well as clear up space for other faculty and staff to supplant the vacated locations throughout the campus.

“The Student Academic Support Center will give physical realization of the University’s commitment to assuring students think about their career objectives from before their first day at the University,” said Kenneth Jessell, senior vice president and chief financial officer. “The goal is to place all entering students in a major that meets their interests while also preparing them for a productive career.”

The creation of the building also doesn’t mean less space. The intent is that the building will help alleviate the stress of traffic and parking by centralizing it more around the SASC, in addition to having a completed PG6.

“I think everyone is excited about the new building,” said Gonzalez.

Initial funding was received in May 2010, but it took four years, including a price reduction and relocation, until the final $7 million needed to complete the project were received.

“We actually had a virtual ground breaking two years ago, so that we could keep the project moving forward by symbolically documenting the dream of this remarkable facility,” said Jessell.

Although the ceremony was not ideal, similar to the rest of the building’s plans, the weather was not enough to derail the plans any longer.

“No umbrellas,” said Rosenberg. “We can suck it up for one photo.”
-news@fiusm.com