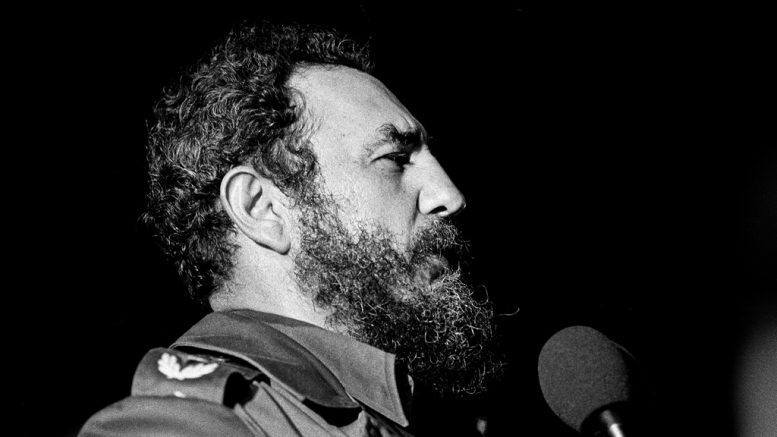 Cubans in Miami took to the streets to celebrate the death of Fidel Castro just after midnight on Friday, Nov. 25.

A nine-day mourning period for the former president, was announced on Cuba’s state television by his brother and current president, Raul Castro.

Fidel, whose communist dictatorship controlled the island for more than 50 years, died at 90 years old.

“A communist dictator has finally died and this is the chance for the Cuban people to take back their country, do away with socialism and finally have freedom,” Ashley Verdugo, a junior studying broadcast journalism with a minor in political science said to Student Media.

Verdugo said she  found out through Twitter that Fidel Castro was dead and immediately thought back to the day her grandfather cried when he talked about the Cuba that existed before Castro took over and how he missed it.

University alumnus Adrián Jesus Kim, whose parents also fled Cuba to escape Castro’s regime, had just arrived home from work when his sister called to say Castro had died. It felt surreal, he said, and he immediately checked online to confirm it was true. Once he saw that Cuba’s communist state TV had announced it, he realized it “was no hoax.”

While Verdugo and Kim were both initially shocked by the news, they knew they had to celebrate the end of the dictator who had caused so much suffering to their families.

The next morning, Verdugo went to Versailles, a Cuban restaurant in Miami, to celebrate with the crowd who gathered there. She wasn’t just celebrating for herself, she said, but for her grandparents, who all but one had died and couldn’t witness this historic moment.

Kim, on the other hand, did a simple celebration ordering a Cuba Libre drink that, for the first time, wasn’t a “mentirita,” and smoked a Cuban cigar.  But, this moment of celebration, he said, felt unbelievably anti-climactic.

“After decades of living in an anti-Castro environment, I expected to feel … more,” Kim said to Student Media. “But the recent domestic and international news overshadows Fidel’s death.”

Kim never thought that Fidel Castro’s end would be a “sensational one” but there are bigger worries on his mind such as the “uncertain political climate” our own country has as well as the heartbreaking reality that it will “take much more than a death to ‘fix’ Cuba.”

Verdugo and Kim know that Raul Castro is still in power, and they realize that the odds of him changing policies is completely unlikely, but the Cuban people, they believe, are one step closer to ending the communist party that has taken over their island.

Cuba’s fight for freedom, Verdugo said, hasn’t ended just because Castro has died but this is the time for Cubans to act especially Cuban Americans.

Verdugo thinks that the next step for Cuba’s freedom should be for President-elect Donald Trump to “tear up” the agreement the Obama administration made with the Cuban regime. Trump’s administration, she said, should also start working with Cuba’s pro-democracy activists, who Congresswoman Ileana Ros-Lehtinen said in a press conference early Saturday morning were being rounded up and thrown in jail following Castro’s death.

The door or maybe just a window, Kim said, has opened in Cuba for “genuine change and progress” but with the world “sugarcoating” his regime, such as the Prime Minister of Canada Justin Trudeau who released a statement expressing praise and sorrow for Fidel, it doesn’t appear encouraging.

In an ideal world, Kim wishes that Cuba would not only be able to gain its freedom but be able to restore itself as the capital of the Caribbean without having “American economic imperialism” on its shores but he knows that Cuba’s future is inextricably linked to the U.S.

While he wishes that America would let the Cuban community make their own change, he thinks other factions of the Cuban government are aware that Raul Castro is “weaker than Fidel” and the next step for success would be to make sure that whoever takes power after Raul Castro is “not another radical- a ‘worse’ Castro.”

While there is still work to be done in order for Cuba’s people to truly be free, the historical importance of this moment can’t be denied.

“To see all these Cubans, old and young, come together and celebrate freedom and democracy is inspiring,” Verdugo said. “The older generation finally feels that their voice is back, the younger generation is hopefully learning that freedom isn’t free and we must fight even here in America to keep our freedoms.”

Michelle Marchante is the 2018-2019 Editor-in-Chief of PantherNOW. Majoring in broadcast journalism, she lives and breathes web, print, radio and TV news 24/7. You can connect with her on Twitter @TweetMichelleM

Winter Music Conference 2014 still has much to offer

Letter to the Editor, Opinion

Letter to the Editor: Do your part to prevent the spread of Zika