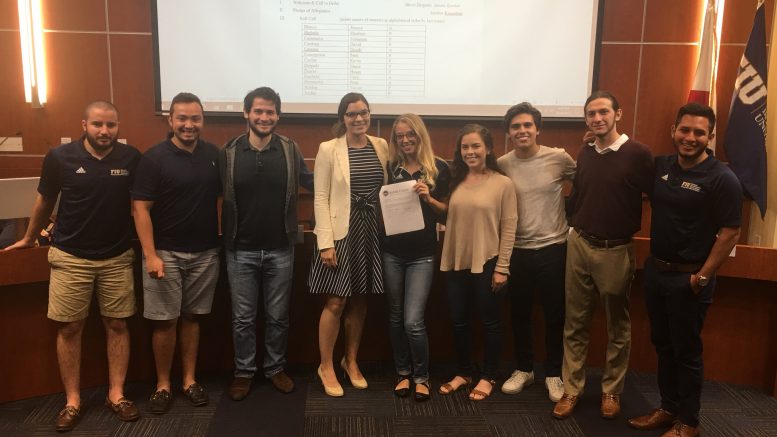 “The Inclusionary Resolution To Support The Undocumented Students, Faculty, And Community Members At Florida International University,” was authored by Francesca Riccio-Ackerman, a senator of the College of Engineering & Computing.

This resolution is an acknowledgement of the struggles undocumented members of the community face, of the anti-discrimination laws found in the FIU Handbook, and the right to accessible education.

SGC-MMC pledges to “include undocumented members of the community and their obstacles in dialogues with administrators for the next three years” and provide “special attention” to the financial struggles undocumented students may have, the resolution reads.

Unable to receive any federal funds, the only financial aid undocumented students are eligible for is at the state level, such as in-state tuition, according to Ackerman, but it’s limited. Students who qualify for in-state tuition for example, she said, must have attended a Florida high school for three years and enrolled in a college immediately upon graduation.

OneStop does have a link on their website to THEDREAM.US, a national organization which provides scholarships to Dreamers. The link was down at the time of publication, but the website is being updated, according to a OneStop representative. Applications open in November.

Ackerman decided to make Deferred Action for Childhood Arrivals recipients a priority during her term after students asked her for help following the rescinding of DACA.

“I felt that FIU and the people who have already released statements in support of their students have done a really great job…but I didn’t feel there wasn’t enough action being taken, and this wasn’t a personal feeling, this was people who were directly affected by this, people who are undocumented saying ‘I feel these are empty statements’…” Ackerman said.

Ackerman had also noticed that besides providing resources for legal assistance and counseling, none of the University-wide emails referring to DACA had addressed financial aid.

But the Inclusionary Resolution is a “statement of sentiment,” so it can’t mandate action, she said, which is why she created a questionnaire. Senators are required to meet with their dean twice every semester, so Ackerman is asking them to fill out the questionnaire during those meetings as part of their pledge to create dialogue.

“[Y]ou input the information of who you are meeting with and there are five politically-neutral questions for them to ask and the intention is that they bring undocumented members of the community into the conversation, into the dialogue they are having with their administrators…” Ackerman said.

Through this questionnaire, Ackerman hopes to create a public database or website with useful information for undocumented students, such as DACA-friendly scholarships, transportation and healthcare options.

“The questionnaire is basically ‘lets get our foot in the door, let’s start our conversation with the administration and bring to their attention…that they have students, administrators, faculty and staff that are going to be affected by this [rescinding of DACA] one way or another and need to start making plans if they haven’t already on how to better serve this population in FIU,” she said.

Joshua Mandall, senator for the School of International and Public Affairs and the chairman of the Rules, Legislation and Judiciary Committee, was in charge of reviewing the resolution for its legality, and was almost like the resolution’s “second author,” according to Ackerman.

Added to the agenda last minute, Mandall was surprised the resolution passed unanimously without too many questions, but assumes it was because it centered on an issue everyone was aware of.

“[I]t passed because everyone had a perspective of a scope of how many people it would touch because it’s not superficial…it’s actually meant to show support of [undocumented students] instead of making them feel like they’re second-class or alienated to the rest of the student body,”  Mandall said. “They’re just as equal as anyone here…Their legal status may say one thing but them as a student is another thing…”

Ackerman is working to create a town hall where undocumented students who are not part of Student Government are able to voice their thoughts and concerns without worry.

Biscayne Bay’s Student Government Council supports the resolution SGC-MMC made and is looking to either create a joint-resolution with SGC-MMC or create their own, according to Leonardo Cosio, president of SGC-BBC.

They are also currently working with BBC’s Haitian Student Association to address the concerns of students with Temporary Protected Status, he said.

Michelle Marchante is the 2018-2019 Editor-in-Chief of PantherNOW. Majoring in broadcast journalism, she lives and breathes web, print, radio and TV news 24/7. You can connect with her on Twitter @TweetMichelleM