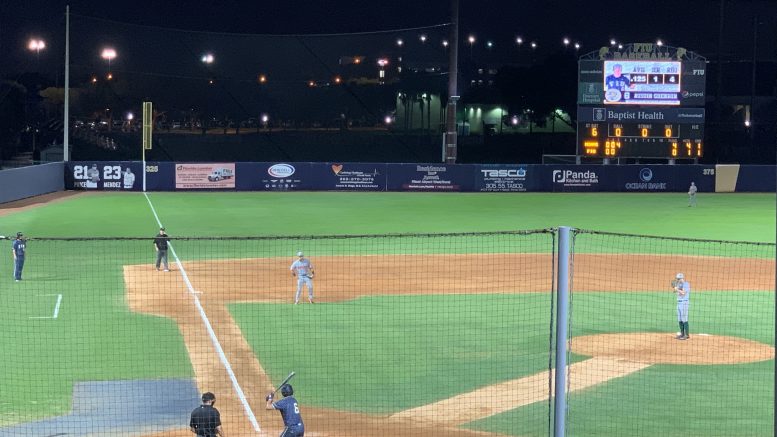 The Panthers loss against UM on Wednesday, Feb. 27 on FIU territory. They play against the Canes again on Wednesday, April 24. Image by Daniel Torres/PantherNOW

What seemed to be a sell out night at the ballpark quickly became a quiet night. On Wednesday, Feb. 27, the FIU men’s baseball team took on cross town rival the University of Miami. After the Panthers swept the Hurricanes last season, confidence was rising high for Coach Mervyl Melendez’s team.

Franco Aleman for FIU and Slade Cecconi for Miami both took the mound as starters. This game had a very wacky start with sluggish pitching and poor base-running which kept the game scoreless through two innings.

Although, the offensive power was there for both teams with the Canes drawing first blood in the top of the third reeling in four runs. The bottom half of the inning provided hope with a blast from notorious third basemen Austin Shenton for the Panthers bringing the game to 4-1. FIU had seven pitching changes coming every single inning since Aleman was relieved in the third In the top of the fourth, the Canes reel in three more runs to extend the lead to 7-1.

The very next inning provided another solo shot home run by Panthers catcher Javier Valdes who set the score to 7-2. The fifth inning provided no runs for neither the Canes or Panthers with only one hit in the entire inning.

In the sixth, The Canes reel in one run off of a sacrifice fly to extend the lead to 8-2. The Canes pitcher, Tyler Keysor pitched lights out shutting down the Panthers in the bottom of the sixth inning.

The top of the seventh seemed to be the nail in the coffin for the Panthers as UM hits back to back home runs to extend the lead to 10-2. This sent Panther fans heading for the exits and emptying out the ballpark.

In the bottom of the seventh with two runs already scored, pinch hitter Seth Cannady hits a bomb to left field for the Panthers inching the score to 10-6.

The eighth inning provided no runs for either team setting up for a dramatic final inning. With the Canes not being able to do anything in the top half of the ninth, Panthers had one more chance to come back and rally. FIU was able to get the score to 10-8 before UM closer Daniel Federman ended the game.

FIU falls to 3-4 on the season as UM streaks on to 6-2 on their season. Student Media was unable to get an interview with the team after the game. These two teams will meet again on Wednesday, April 24 with FIU playing at UM in Coral Gables.

The taboo on sex stems from Christian values

The Power Of A Shirt: How Promotions Get Fans Interested