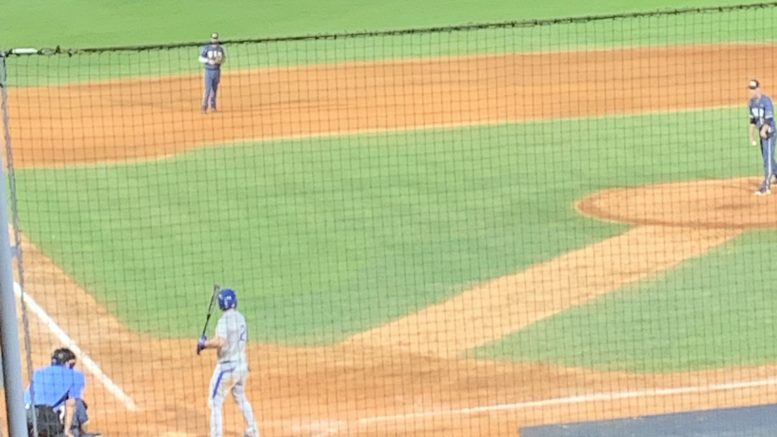 The Panthers beat Seton Hall on Saturday, March 9 in a 10-7 game. The Panthers face off against Stetson University on Tuesday, March 12 on Panther territory. Image by Daniel Torres/PantherNOW

The FIU baseball team (9-6) continued to show season form on Saturday, March 9, against Seton Hall University (1-9) with a 10-7 win to improve the Panthers’ season. The Panthers beat the Pirates again on Sunday, March 10, in a 6-5 game, finishing their weekend matches against Seton.

The team will play at home against Stetson University on Tuesday, March 12. This will be their last home game until Friday, March 22.

“Whenever you score 10 runs off of four runs that’s pretty darn good,” said Coach Mervyl Melendez about the outcome of the game.

The very next outing for the Panthers, #27 Jose Garcia hits a home-run to bring the score to 7-2. The top of the fifth inning saw a pitching change for FIU as MacDonald was replaced by #39 Christian Dearman.

Dearman struggled on the mound as Seton Hall brought the game to 7-5 which forced Dearman to be replaced by #11 Greyson Fletcher. The top of the sixth inning saw Seton Hall drawing one closer making it 7-6 which would be the closest they got in this ballgame.

Entering the seventh inning, Fletcher was replaced by #32 Will Saxton who faced three and sent three back into the dugout. Bottom of the seventh inning was another difficult inning for Seton Hall pitching as FIU reeled in three runs to make the game 10-6.

The top half of the eight only saw Seton Hall scoring one to make the game 10-7. #17 Gio Soto relieved Saxton to close out this ball game. Most of the damage done by Seton Hall was done with two outs and stranded 10 men on base for the entire game.

Decisions To Proceed With FIU Bridge Are Insensitive And Irresponsible