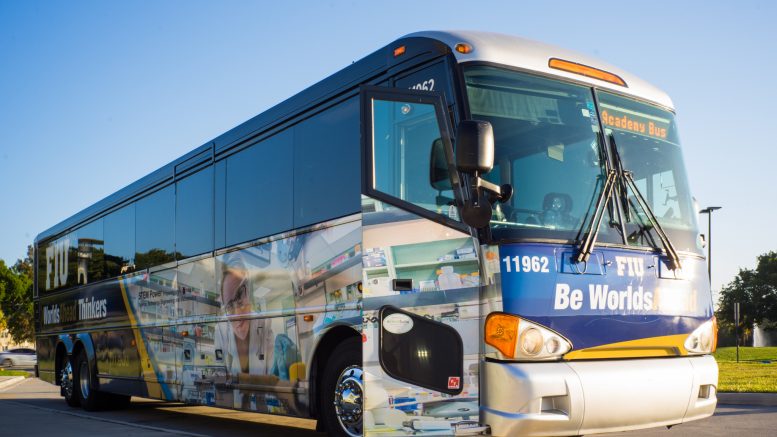 Every day students have to pay $2.50 for a single ride on the Golden Panther Express (GPE) to travel between the Modesto Maidique Campus and Biscayne Bay Campus, but the Student Government Association wants to change that.

The Student Government Councils from both MMC and BBC are collaborating on a cross-campus, cross delegation initiative to reduce the fees of the GPE shuttle, with the goal being to make it permanently free.

“A cross-campus collaboration doesn’t always happen because we are two separate governing councils, but this is a need of the entire student body,” said Dominique Rose Ingraham, SGC-MMC Honors College Senator.

The Senates of both SGC-MMC and SGC-BBC passed a university-wide resolution on Monday, Feb. 18 stating that “the official opinion of the SGA” was to reduce the fees of the GPE shuttle.

Ingraham said to Student Media that the committee has already met with Thomas Hartley, assistant vice president of Parking and Transportation, and that he is supportive of the initiative.

During the committee’s meeting with Hartley, they discussed the possibility of increasing the FIU student transportation fee to fully subsidize the costs of running the GPE shuttles.

“Nothing is concrete or set in stone yet, but Thomas Hartley’s percentages range somewhere between four and eight percent of an increase [in the student transportation fee],” Gaeta said to Student Media.

In other words, an increase ranging from $3.56 to $7.12 in each student’s transportation fee is needed to make the GPE shuttle free on a per student, per ride basis.

As of the 2016-2017 semester, an average of 3,543 unique users use the GPE shuttle, according to the university-wide resolution.

Gaeta said that they are currently waiting on the approval of the financial models from upper management in Parking and Transportation to move forward with the initiative.

“I agree to an increase in the transportation fee for the discount of the GPE shuttle,” states the petition.

Students must provide their names and Panther IDs to sign.

Ingraham said that the committee’s main targets are those who do not take the bus regularly because they would be the ones mostly affected by the initiative. The counter argument that she provided to Student Media for the increase in the transportation fee was that most of the fee goes into the garages and “not everyone has a car.”

“I think it is kind of ridiculous that it does cost money. I understand why now that I’ve talked to the [Parking and Transportation] and looked at the numbers, but it is definitely time to change,” Ingraham said.

The issue of the GPE shuttle fee is not just a recent issue, according to Gaeta. The fee has been a prominent concern for both students and faculty.

Noel said that the initiative would help students who need it the most and that he would also be impacted by it.

“One dollar, two dollars a day matters a lot. I understand the value of saving $5 and $10 this week, and if students can save $10 this week, that can be a meal for next week,” Noel said.

“I don’t understand how they are charging an additional fee when they already charge us with a $90 transportation fee. It should be covered in our fees,” Clancy said. “It’s really frustrating that they don’t provide us transportation when they switched [physical education majors] to the other campus…we cannot keep paying both [fees].”

Balfour said that the issue was brought to her attention by a University professor at BBC. The professor told her that this kind of initiative has been talked about before but never made a priority, and so asked Balfour to take it to the Student Government Council at BBC and make it work.

“I would hope to actually achieve getting the buses for free, and I wouldn’t like settling for anything less than that,” Balfour said.

Ingraham said that she hopes that the initiative will be implemented no later than Fall 2019.

Editorial: Graduating in four years is so high school