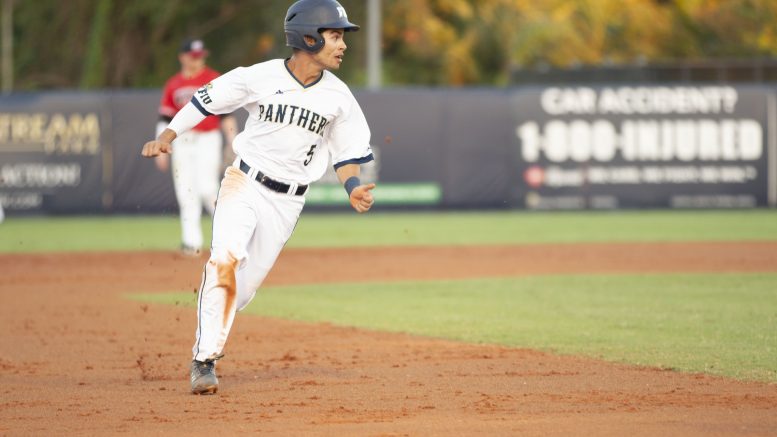 Infielder Derek Cartaya runs the diamond to get a score for the Panthers. Image taken by Jorge Coll/PantherNOW

The baseball team opened the weekend with a 2-1 win over Western Kentucky University for the second C-USA meeting of the season. The starting pitchers for the night were Logan Allen for FIU and Eric Crawford for WKU.

The most important highlight of this game was how dominant Allen was on the mound for the Panthers with eleven strikeouts. Allen was pulled in the top of the ninth inning with two outs down and one more to go to end the game.

“He tried to make his case, I knew what his answer was going to be when I went to the mound and told me this was his ballgame and wanted to finish it,” said coach Mervyl Melendez about Allen.

With Allen’s pitch count running high, this was the ultimate decision on why he was pulled from the game.

For most of the game, there was not much offense with the Panthers leading 1-0 that alluded to with a struggling Crawford for WKU. A pitching change for the Hilltoppers brought somewhat more of stability with Dalton Shoemake entering the game. The only damage taken was a left field bomb by FIU’s Javier Valdes in the bottom of the sixth to extend the lead to 2-0.

“I thought we had some quality at bats, not the expected run turnout but we got it done,” said Melendez.

When Allen was relieved by Jan Figueroa with two outs in the top of the ninth is when WKU did some damage. A hit to right field which seemed to be an easy roller passed by FIU’s right fielder which allowed the runner on second to score making it 2-1.

WKU would not be allowed to do more damage as Figueroa closed the game out.

In the second game of this series, WKU rallied late in the ninth to give the Hilltoppers a 5-4 win over the Panthers.

The Panthers lost to WKU on their Sunday, March 24 game in a disappointing 1-15 loss to the Hilltoppers.

Not your regular ‘Twilight’ vampire problem

Decisions To Proceed With FIU Bridge Are Insensitive And Irresponsible