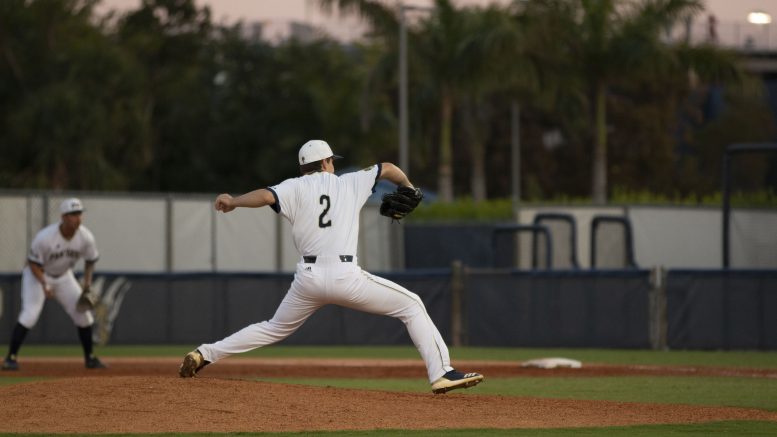 Jose Machado pitched during the FIU versus FGCU game. This image is from 3.23.19. Image by Jorge Coll/PantherNOW

FIU baseball engaged in a two game midweek series against Florida Gulf Coast University. During the first game on Tuesday, March 26, Eagles took the win 3-0 up in Fort Myers. The teams played their second match on Panther territory on Wednesday, March 27.

FIU lost against FGCU at home with a score of 6-11. Panthers continue to struggle as they fall to 11-14 on the regular season.

The pitching match-up for this series finale consisted of Everett Hurst for FIU and Trey Vickery for FGCU.

The Eagles started this game out very quickly once again reeling in two runs off of a bases loaded double in the top of the second inning. After taking early damage, Melendez was fast to call to his bullpen relieving Hurst and bringing on Jose Machado.

The Eagles continued to do damage reeling in one run in the top of the third and two more in the top of the fourth. This forced another pitching change with Machado being relieved and Steven Casey taking the mound for the Panthers. This change seemed to be no difference as FGCU reeled in three more runs in the top of the sixth making the game 8-0.

With the bullpen struggling and no offense, the Panthers finally get on the board with two runs in the bottom of the sixth off of a wild pitch and a single to left by Austin Shenton.

In the top of the eighth, FGCU continued to do damage reeling in two more runs, making it a 10-3 ball game.

FIU was not going away easy in this game with a big bottom of the eighth reeling in two runs off of a Shenton single to right bringing in Derek Cartaya and a runs batted in double by Nathan Housen.

Coming into the ninth inning, Melendez brings in right handed pitcher Greyson Fletcher to face the next set of FGCU batters. Panthers and Eagles would go on to both score one run each making it a final score of 11-6.

Student Media was unable to get interviews post-game due to the loss.

Next up for FIU baseball is their longest road trip of the season starting with a weekend series of Conference USA play vs rival Florida Atlantic University.

Spring break means work from home for some students

2014 NFL Mock Draft Round 6: Faciane to swim with the Dolphins

FIU Is Taking Necessary Steps To Heal The Bay