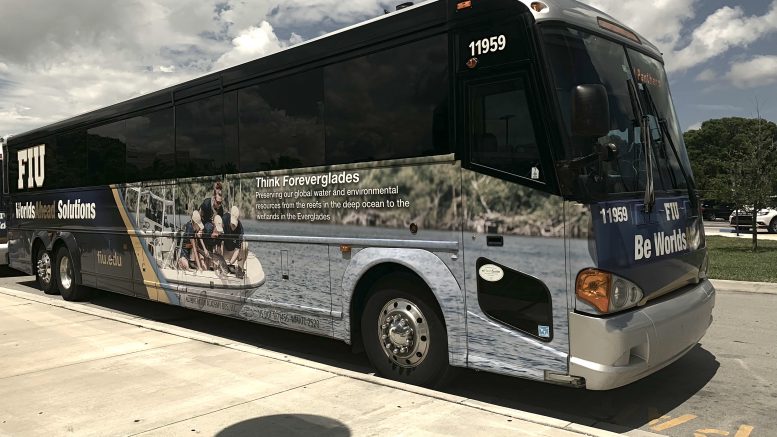 After a student led initiative, the FIU Board of Trustees will raise the Transportation Access fee by 5%, allowing students to use the Golden Panther Express Shuttle for free.

The Golden Panther Express (GPE) Shuttle provides an alternative to driving between Modesto A. Maidique Campus and Biscayne Bay Campus.

The decision eliminates the $2.50 charge that students currently pay to ride the shuttle between campuses. Instead, the money used to pay drivers and maintain shuttles will come from an increase to the Transportation fee.

Students currently pay $89 per semester transportation fees for the fall and spring, and $83 during the summer. Since approved, the fee will increase by $4.45 for fall and spring semester and $4.15 for summer. The shuttle is a $1.9 million dollar operation, yearly.

The transportation fee pays for FIU’s shuttles and school owned vehicles like golf carts. It also covers $66 million of debt and maintenance for parking garages. The last increase to the transportation fee was in 2012 to support the construction of Parking Garage 6 and the Tech Station that is connected to it.

The Board of Trustees decision came after a rare collaborative effort from the Student Government Councils at MMC and BBC.

The councils created a petition to raise the Transportation fee in exchange for free rides and collected over 3,000 student signatures. In the short amount of time that the survey was conducted there was a “surprising” amount of feedback, according to Mahalia Balfour, SGC-BBC vice president.

Along with answering survey questions, some provided detailed feedback as to why they feel so strongly about the issue; one student went so far as to upload a video testimonial about how the cost per shuttle trip is negatively impacting them.

According to the 275 survey respondents, 244 said yes to an $8 increase to the transportation fee in exchange for free rides between campuses. The survey also included questions about potential transportation routes to I-75. 202 students said they would be open to taking classes on more than one campus if there was transportation that included I-75. The Board of Trustees are not currently considering a route to I-75.

The fee increase is set to take effect beginning Fall 2019.

Hours of operation are there for a reason

SGA plans to clean the Bay