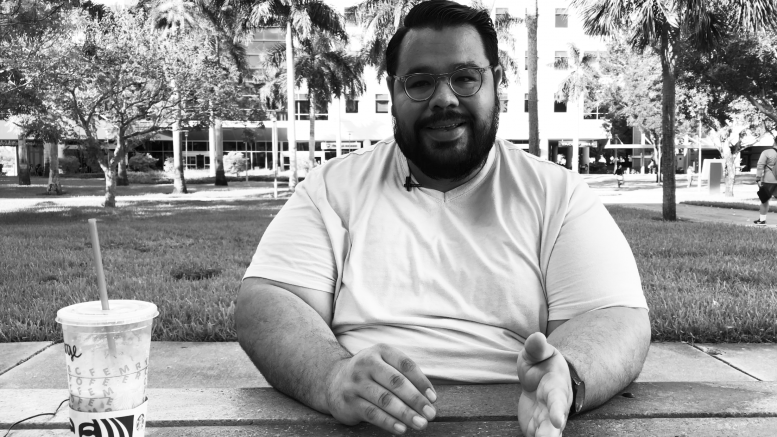 For Julian Tubella, the son of Ecuadorian and Cuban immigrants, pursuing an architecture degree meant sacrificing time with family, his main motivation.

Clara Hernandez was the first person in her family to enroll in college in 2012. Now, a trip to Japan and seven years later, she is the first to earn a bachelor’s degree.

She didn’t do it alone.

She convinced her sister Jessica, who is seven years older and never enrolled, to “do college together.”

“Seeing my mom who’s only worked as a housekeeper for so long and seeing my dad work as an electrician, I saw myself as more than that,” said Hernandez.  “It was a weird reverse motivation that made me and my sister want to push ourselves further.”

First generation students are the first to attend college in their family.

Around 25% of Florida International University’s student body is composed of first generation students, according to the Office of Multicultural Programs and Services.

National First-Generation College Celebration is Nov. 8, a day to honor the anniversary of the signing of the Higher Education Act of 1965 under President Lyndon B. Johnson.

Although Clara’s parents never attended college, she was only in kindergarten when her mom told her “your education is the only thing I’m leaving you.” But getting admitted and ‘surviving’ through it was the challenge.

“My parents gave me a lot of pressure telling me ‘you have to do this and that’ but you have to figure that out on your own,” said Hernandez who is majoring in anthropology.

Hernandez struggled academically at the beginning of her seven year college career and believes her perseverance taught her parents patience.

“At the beginning, I ended up taking two classes a semester because it was a lot and my mom didn’t understand, she said ‘you need to graduate now, you are getting old,’ like it’s a ticking time bomb,” said Hernandez. “Then, when she saw I was getting on the Dean’s list and my GPA was getting better and better, she understood.”

In college, Hernandez also fulfilled her dad ́s lifelong dream of having her travel to Japan. She applied to study abroad, received a Gilman scholarship for $2,000 and saved $5,000 for the trip.

“I did it all on my own and I remember it being the biggest thing that ever happened in my family,” said Hernandez, holding back tears. “It’s been the talk around the family like, ‘oh yeah she went to Japan,’ so I fulfilled a thing my dad really wanted for me that he wasn’t able to do.”

For Julian Tubella, the son of Ecuadorian and Cuban immigrants, pursuing an architecture degree meant sacrificing time with family, his main motivation.

His parents support him despite not understanding his assignments or long nights working on his architecture table.

“To see my dad working 40 hours a week just to put food on the table, or see my mom work even when she was tired, and understanding they were locked into that because they didn’t have a better education was a driving force that kept me going,” said Tubella.

Tubella said he lost all his childhood friends when he started college.

“While they were going out and enjoying their lives, I was at school studying,” said Tubella. “They really didn’t understand the sacrifices that I was making in order to make my life better.”

Now, Julian is pursuing his masters, is a research assistant in a robotics and digital fabrication laboratory he helped create, won an award for his thesis, was named student of the year by the architecture association and received the university’s Worlds Ahead award.

“My grandma always wanted me to study so I always had her in the back of my head pushing me forward,” said Julian. “Unfortunately, she passed away before I could graduate but I made her proud. That was a big accomplishment.”

Melaine Rodriguez’s parents have degrees, but she is the first in her family to pursue a college education in the United States.

Rodriguez’s mother was 23 and her father was 29 when they fled Cuba and were never able to work in their field.

“They just started doing whatever, working construction, hair styling or different things they could to survive in a new country where they didn’t know anything,” said Rodriguez. “But they always made me aware of things that were available to me like scholarships, they tried to inform themselves in order to inform me.”

For Rodriguez, the process of getting into college and calculate if she could afford college was the hardest for her family.

“We just had to live day to day paying the things that we needed so there wasn’t enough money to set up a college fund for me and my brother,” said Rodriguez, “It was our responsibility to be able to get scholarships and go to college.”

Despite having a college education, Rodriguez’s parents didn’t understand what her english and exceptional student education majors meant. Her proudest moment was explaining to them how her degrees are a path for her to fight for social justice.

“My dad, when I was explaining my majors, he said to write them down on a piece of paper so he can tell people because he still didn’t understand,” she said. “So, he carries around a little piece of paper with him at all times he pulls it out and he says “this is it, It’s just very long.”

Rodriguez earned a full-scholarship to attend FIU but works two jobs and monitors her parents health. She believes professors need to better understand all the pressures a first generation student has.

“When you have to turn in a paper late and they ask you for medical documentation, I have to say I can’t because it’s not my problem, it’s my family’s problem, I just have to be there,” said Rodirguez. “It takes away my ability to study as long as someone else would, or if I’m at work for longer because I have to make more money that day, that also takes away from my time to study.”

“Now, it’s like we are both first generation students together,” said Rodriguez

Hernandez believes it’s important for first generation students to get involved inside and outside the classroom.

“Try to experience college as much as possible, you’re not obligated to but you owe it to your parents who were not given that opportunity,” said Hernandez.