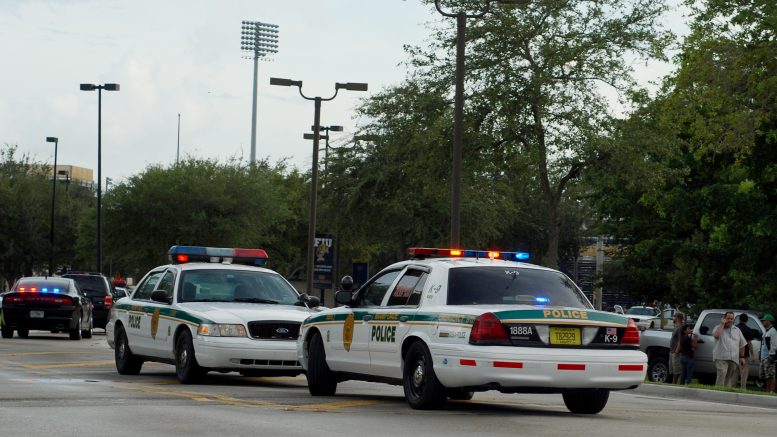 On the second day of the spring semester, an FIU bus en route to Modesto Maidique Campus from Biscayne Bay Campus was hit by another car.

Christian Namphy, a freshman public relations student who was sitting on the second row of the bus, said the bus barely made it to Alonzo and Tracy Mourning Sr. High, the school adjacent to BBC. He says the crash occurred minutes after leaving campus.

The crash happened at 3:09 p.m. according to Major Jorge H. Gomez from FIUPD.

“When it happened, nobody heard anything. The bus was completely fine,” said Namphy, who said that there was some confusion as to what had happened. “The car that hit us got totaled.”

There were no reported injuries. On a video published on Barstool FIU on Instagram, the crowd is seen calm, and a student asks “what happened?” and the officer aboard the bus replies, “an accident.”

Gomez told PantherNOW that the other car did receive extensive damage. The driver was an older woman who failed to use the stop sign and hit the FIU bus on the rear left tire. She was cited with failure to yield the right of way.

According to Gomez, none of the 55 students that were on the bus were injured, and the accident was not the FIU bus driver’s fault.

Namphy said members of FIUPD got on the bus and asked for names, addresses, and Panther ID from every passenger.

“In order to file an accident report, and in order to expedite the kids missing classes and get them another shuttle right away, we took their information,” said Gomez. “If we didn’t do that, we would have to wait for the North Miami Police Department to get there.”

Gomez said that the NMPD got to the scene of the crash 30 minutes after it happened.

According to Namphy, the bus was parked on the side of the road adjacent to BBC, and auxiliary buses came to take students from BBC to MMC.

Breaking Down The 2020 FIU Softball Schedule