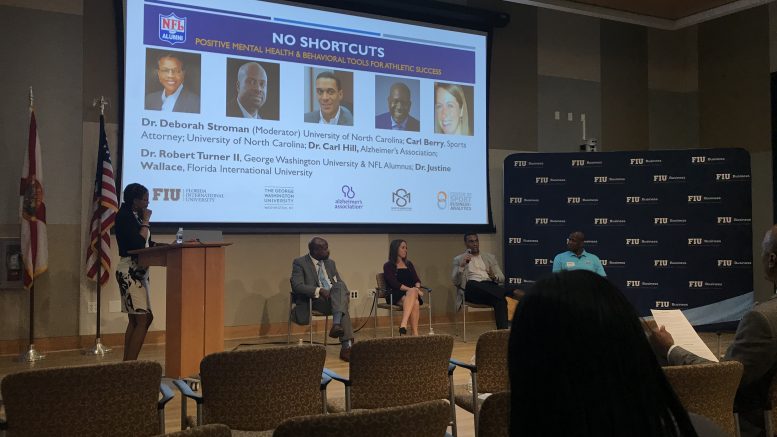 “‘No Shortcuts:’ A Town Hall on Positive Mental Health with NFL Alumni” was moderated by former NFL athlete and professor Robert Turner II and Deborah Stroman on Thursday, Jan. 30.

Former athletes answered what the challenges and celebrations are of being successful athletes during the first session of the town hall.

Each of the former athletes discussed the importance of having an outlet for student-athletes to express their emotions and thoughts.

They also discussed how the journey of any athlete is never easy and there is a constant feeling of pressure and stress that they might feel in their sport or personal lives.

Turner asked the panelists how a student-athlete might deal with the fear of getting a negative reaction from their coaches, team or audience.

Lewis emphasized how crucial it is for those responsible for student-athletes to provide them guidance.

He mentioned how important it was to him to let his football players know that he will always have their best interest.

“This is about mentoring young men. There needs to be a positive relationship with each of my players. Someone in their life has to be real with them and let them know that you’re someone they can trust,” said Lewis.

The stigma around mental health in general also became a major talking point among the former athletes.

The former football players on the panel stated that because mental health is not regularly talked about, you have athletes coming out of college or sports without any structure or guidance.

Thomas, a former NFL linebacker for NC State, noted how difficult the transition to “real life” for many athletes is when they no longer have sports to structure their life around.

While Turner fielded questions and thoughts from professionals in the audience throughout the session, it was a statement by a swim coach and educator that garnered the most applause during the panel.

The audience member stated how big organizations like the NFL and NCAA should “put their money where their mouth is” by providing financial, educational and mental health support to the athletes they are recruiting.

She stated how she felt as though the organizations should begin taking responsibility for their recruited athletes starting in high school.

The second session of the talk began with health and sports professionals discussing the lessons, strategies and tools athletes should maximize.

Moderated by Stroman, a former Division I athlete at UNC, the panel gave insight as to how leaders and athletes would be able to deal with the struggles of mental health.

On the panel were Carl Berry, a sports attorney, Dr. Carl Hill from the Alzheimer’s Association, Dr. Justine Wallace, a clinical psychologist from FIU, and Turner.

The panel gave an expert perspective on athletes’ experiences with mental health.

Dr. Wallace, a psychologist at FIU’s Counseling and Psychological Services who works closely with the school’s student-athletes, talked about how critical it is to provide athletes with a positive mental health resource.

“We must help normalize and validate their experiences,” said Dr. Wallace.

Towards the end of the session, Stroman brought up marijuana use among athletes as a coping mechanism.

While becoming legalized across the United States, drug use within the athletic world is still penalized for using it.

The panelists noted how it is important to understand why an athlete might use marijuana as a coping mechanism and teach them healthier ways of dealing with their internal pain.

Turner ended the panel by stating that by creating healthier environments and destigmatizing mental health in sports, it will lead to healthier outlooks among athletes and professionals.

FIU looking to Improve Team Defense and Chemistry on Offense