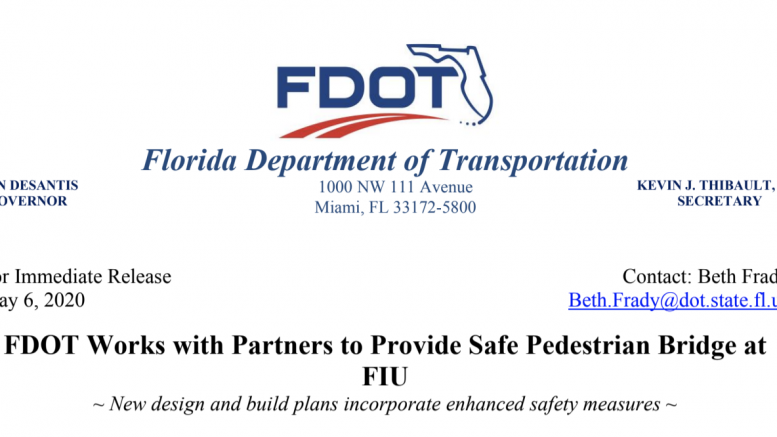 The Florida Department of Transportation (FDOT) announced the plan to design and build a “much-needed pedestrian bridge” on SW 8 Street and SW 109 Avenue via a press release on Tuesday, May 6.

According to the statement, the FDOT will manage and oversee the project.

After the collapse of a previous bridge being constructed in March of 2018, FDOT Secretary Kevin J. Thibault, P.E. says that “FDOT has learned valuable lessons since the tragic events surrounding the FIU bridge collapse two years ago.” They will also follow the recommendations from the National Transportation Safety Board (NTSB).

“The Department is working closely with local partners, including the City of Sweetwater and Florida International University, to provide pedestrians a safe and accessible crossing to and from the University,” read the statement.

According to the document, an FIU student was struck and killed in June 2017 while crossing the road at SW 109 Avenue. This prompted local and state officials to address pedestrian safety in this area.

The design phase will begin in early 2021 and is expected to last two years.

The aesthetics of the bridge will be a collaboration between FDOT and FIU. Construction of the replacement bridge will take approximately two years.

Neighborhoods of Refuge depicts the reality of Miami’s homeless

Coronavirus Has Impacted Everyone. We Want To Hear Your Stories