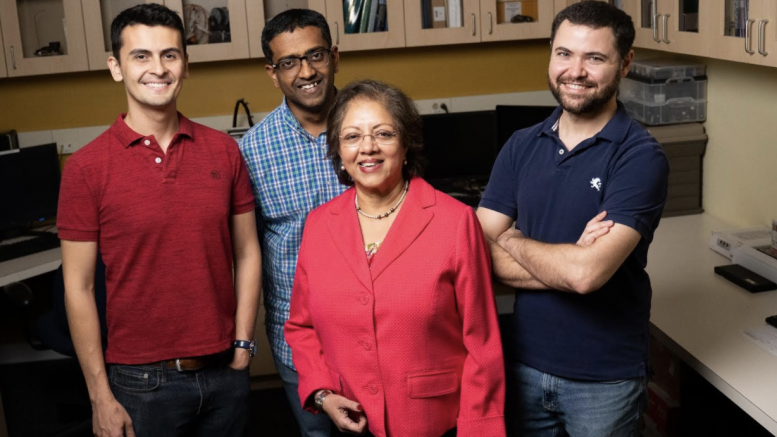 Dr. Ranu Jung and her teamwork in the lab to create a prosthetic hand. Photo courtesy of Andres Pena

One FIU professor and her staff were nominated as 2020 Cade Prize finalists, inventing the first prosthetic hand that restores the sense of touch to its users.

With a $50,000 prize at stake, Dr. Ranu Jung, chair of the Biomedical Engineering department at FIU, worked with Adaptive Neural Systems (ANS) Laboratory to develop this project.

Their neural-enabled prosthetic hand uses complex neurotechnology to enable hand function in amputees and those with spinal cord conditions.

“When the person tries to control the [artificial arm] to pick up something…the information is processed and wirelessly communicated to a neurostimulator that is implanted under the skin,” said Jung.

According to Jung, those who have lost a hand may still feel sensation from their amputated limb through the prosthetic.

This neural interface technology has been long in the making, due to the time needed to conduct clinical trials. Jung first started developing the prosthetic in 2006 with hopes of finding a candidate in need.

Jung had always been interested in the relationship between medicine and engineering. Her idea arose after attending a Department of Defense workshop, where they presented an idea to revolutionize prosthetic limbs.

The ANS Lab found a candidate for the hand after recruiting a graduate student, Andres Pena, at a prosthetics facility.

“[The interface has] gone from a concept to [somebody now having] the implant in him for two years,” said Jung.

As the pioneer of this technology, Jung says the prosthetic has greatly improved the candidate’s quality of life.

“He has more confidence. He doesn’t have to… pay as much attention to those things that we take for granted,” said Jung. “You can reduce your mental load, or what we call the cognitive load.”

After creating the neural-enabled hand, the ANS Lab hopes to expand into other prosthetics including higher amputation levels including the upper limb, lower limb, and bilateral amputation.

However, the scope of Jung’s research extends far beyond prosthetics. The neural interface technology has potential uses in health conditions such as diabetes, depression, and epilepsy.

For now, there are still ways to go into clinical trials before this technology becomes widely available. Jung said, “We hope that in four or five years we will be in that space.”

Now a Postdoctoral Fellow, Pena says that the ANS Lab deserves to win because of its achievements with the limited resources of a small academic team.

Pena told PantherNOW, “We are unique in that we are an academic lab that has successfully obtained an Investigational Device Exception from the FDA and we are running a First-in-human clinical trial without having all those resources the big companies have.”

For the ANS Lab, winning the award would mean more than just cash.

“The primary thing is recognition for this awesome team and so many years of effort,” said Pena. “The money can help with a lot of things like…getting resources that we need to be able to collect data.”

For Jung, the success of her project, she says, is a reward in itself.