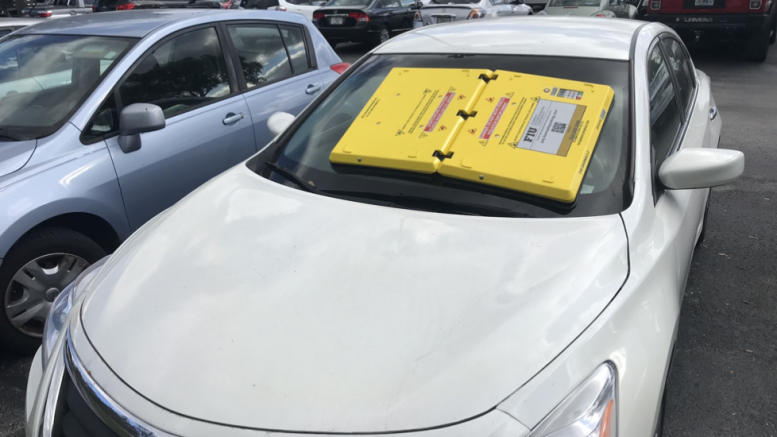 A Barnacled car in the parking lot next to the Riccardo SIlva Stadium. Photo by Lara Coiro.

Over the summer, FIU’s Parking and Transportation Department implemented a new device to deal with delinquent parkers: the Barnacle.

University students who live on campus say the vehicle immobilization device is too expensive and unforgiving, as it forces a person to pay off their citations in full and a fee to Barnacle of $50 to free their car. Close parking in proximity to the housing quad at the Modesto Maidique campus has become limited in the last year.

“Financially, obviously, it was really difficult. I had to ask for help from my parents, which I didn’t want to do, and it’s just not great for students who are already struggling to pay for school itself.” said Dayna Schmutz, a junior majoring in marketing who lives in University Towers.

One day, when parked in a student spot in the lot, Schmutz received an email saying that her car had been immobilized by a Barnacle. Schmutz paid $300 to remove the device, meaning her tickets had accumulated to $250.

The Barnacle is a plastic cover that uses suction cups to stick to the windshield of a vehicle, and is administered by a parking enforcement officer. Forcing its removal without paying can cause the windshield to break and even using too much force against the device activates a loud alarm. To free one’s car, students must follow Barnacle’s online payment platform to pay off their citations. A code is then returned to them which is inputted into the Barnacle, and the suction is released.

Before, FIU used boots to deal with delinquent parkers after a student racked up a certain amount in parking tickets. Now, the department can utilize a Barnacle at any amount.

“We can immobilize a vehicle for any amounts that are due.” said Brenda Dome, director of Administrative Services for Parking and Transportation, confirming that FIU Parking can Barnacle a car at their own discretion.

Sinclair Brown, a junior majoring in construction management, also lives at UT and had a Barnacle put on her vehicle. Like Schmutz, Brown accumulated tickets– about $350 worth– from parking in available administration spots in the UT lot.

“The parking spot that just says ‘Admin’, we are not supposed to park there. But with COVID, no one’s working and […] it’s just an empty parking lot.” said Brown, referring to the lot reserved for administrative workers in between the UT lot and the Parkview parking garage.

For students who live at UT, parking consists of knowing where and when to park to avoid a citation. The gradual appearance of Barnacles on student cars in the parking lot shows that students are struggling to find parking.

“They just recently took away all the parking in what is going to be the new Parkview II. That was […] where most of the housing students parked and now, it’s very limited if you want to park near your building.” said Schmutz, regarding what challenges residential students face.

Brown was forced to miss work after she found the device placed on her vehicle. Her bill was $400.

The university has had issues collecting parking citations. Last year, PantherNOW reported that over 54,000 citations remained unpaid totaling over one million dollars.

But, Brenda Dome, Director of Administrative Services for Parking and Transportation, said the motivation to switch from booting cars to using Barnacles is because of its self-releasing nature, allowing an owner to free their car without having to contact the parking department.

“Our priority is to ensure compliance with the rules of regulations and that requires individuals on campus to have a valid parking permit.” said Dome.

The newest Parkview building will mean that more students, and subsequently more cars, will be on campus. Andrew Naylor, Senior Director for Housing and Residential Life, confirmed Parkview II would not have additional parking, citing that another garage would have been out of the budget.

Naylor said the decision to build the newest building atop the parking lot exclusively for housing students was the only option to keep Parkview II close to the housing quad and for students to be involved with residential life.

For the last three years, there has been a waitlist of about 700 students seeking on-campus housing, and Naylor says he’s confident that the waitlist will go back up once the pandemic settles.

He doesn’t believe that a lack of convenient parking will be a deterrent for new students.

“There is plenty of parking all throughout our campus, despite what some people think,” he said. “It’s just a little bit of a walk, and that is something that many students at other campuses are faced with.”

Naylor said he’s not sure how Barnacles work.

“I just discovered it the other day,” he said. “The easiest way to avoid parking fines anywhere– not just on campus, but anywhere– is to make sure you’re parking where you are legally allowed to park.”

The lack of close and convenient parking is a concern for some students. Brown and Schmutz stated that they didn’t feel safe parking far and walking to their residences late at night.

Naylor advised using the Freebee shuttle system, which runs from 7 a.m. to 7 p.m. on and around campus. He assured students that FIU is a generally safe campus, with security vehicles often making rounds around campus.

FIU Police Captain Delrish Moss also offered a student escort service, where students can contact FIUPD and they will be picked up anywhere on campus and escorted to their destination.

Controversy surrounding the use of Barnacles is not only reserved to FIU but has also caused an uproar among college students at other universities.

Schmutz wished FIU would provide more parking and not charge extra to park in the Parkview parking garage. To obtain a permit to park here, it is an extra $300 a year. Instead of a Barnacle, Brown said that FIU should put a hold on a student’s account.

“I understand where FIU is coming from, but they’re at fault for not providing parking.” Brown said. “I feel like FIU, when it comes to finances — their priorities aren’t intact.”