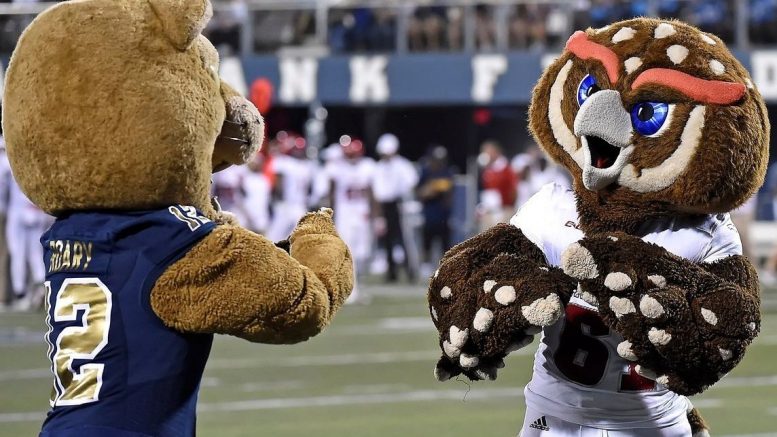 Roary and Owlsley squaring off before another chapter of the Shula Bowl is set to begin. Photo by Underdog Dynasty

In college football, rivalries are what define key moments of a team’s season year in and year out.

It doesn’t matter what the records are or where they stand in the college world. Rivalries are long-standing and personal, and the two teams will give it their all no matter what.

It’s usually very common for two college teams near each other to face off in sports like football every other year.

The Iron Bowl between the Alabama Crimson Tide and the Auburn Tigers is famous in the college football landscape. Other noteworthy regional rivalries include the Florida Gators vs Georgia Bulldogs and Michigan Wolverines vs Michigan State Spartans.

But South Florida fans don’t have to look far to find a heated rivalry that spans almost two decades, and has created some of the most memorable moments for both school’s athletic programs.

The FIU Panthers vs the Florida Atlantic Owls. Miami vs Boca Raton. Both colleges are 55 miles apart- about an hour away on I-95 or the Ronald Reagan Turnpike.

How did it all begin? How has the rivalry fizzled out over the years? And why is it named after a pro football coach?

It begins with FAU, who formed their NCAA Division I football team in 2001, and was independent. This meant that the team didn’t belong to any specific conference, and that they chose all 12 teams that they faced off against in a season.

Not surprisingly, FAU’s first season wasn’t very successful, resulting in a 4-6 record and no bowl game appearance. It’s very difficult for any sports team’s first season to go well due to an inexperienced roster and coaching staff, and the Owls reportedly held practices in the gymnasiums of local high schools.

The following year, FIU joined Division I football and was also independent. Their season wasn’t much better, going 5-6 and also missing out on a bowl game.

But what really mattered in their inaugural season was the final game against FAU. Both schools agreed to play at Pro Player Stadium (Now Hard Rock Stadium) in front of 10,000 fans. It was a 31-21 loss for FIU, but it created radiation between both schools that has flourished to modern day.

The two schools always set a game against each other for every season afterwards. Even when both teams moved into the Sun Belt Conference in 2005, the rivalry continued. When both schools left and moved into Conference USA in 2013, the rivalry never skipped a beat.

It became so popular that it was given an official name- The Shula Bowl. It’s named after the late head coach of the Miami Dolphins, Don Shula. He coached the NFL team from 1970 to 1995, and both school’s head coaches were linked to Shula in one way or another.

For FAU, coach Howard Schnellenberger was a former assistant coach to Shula in the 1970s, helping Miami reach a pair of Super Bowls in the process. He then became the offensive coordinator for the Dolphins from 1975 to 1978.

For FIU, coach Don Strock was a former backup quarterback for the Dolphins from 1973 to 1987. He played behind both Bob Griese and Dan Marino, who would both go into the Pro Football Hall of Fame. He was part of the squad when the Dolphins won Super Bowl VIII in 1973 against the Minnesota Vikings.

The winner of the Shula Bowl receives the Don Shula Award, a wooden trophy engraved with the helmets of both schools and the scores of each game in the series. The winning team keeps it for a year until the next chapter of the series is played.

Looking to now, the rivalry is set to renew again in Boca Raton on October 2 at 3:30 p.m. It can be watched on the Stadium network, and PantherNOW will live tweet the game as it happens.

While the rivalry is historic, it’s mainly been on the side of the Owls. Out of the 19 meetings between the two schools, FAU has won 14 of them. Because FIU’s win in 2005 was taken away due to violations, the Owls won the first eight games of the series until FIU’s 41-7 win in 2011.

This is why the Shula Bowl has died down since the 2000s. In football, the rivalry has been in favor of FAU for so long that most students in FIU don’t remember the last time the Panthers beat the Owls, which was in 2016.

Of course, the rivalry between the two schools transcends football. Any contest between FIU and FAU takes precedence for fans and students of each. Because they’re both in the Eastern Division of Conference USA in most sports, they’re practically guaranteed to play each other.

For the Panthers, FAU has had their number in multiple sports as of late. In baseball, FIU played the Owls eight straight times in the 2021 season and lost six of the contests. Their historical record against FAU is 16-44, dating back to 2006.

That’s not to say that FIU struggles in every sport against the Owls. In men’s soccer, FIU shut out the Owls in 2021, and has a dominant 12-2-1 record dating back to 2006. The swimming and diving team has a perfect historical record of 11-0 against FAU dating back to 2013, including their most recent meet in 2021.

The Panthers have also had historical success against the Owls in indoor volleyball, beach volleyball, and tennis.

Still, FIU would need to win against FAU in football to bring the Shula Bowl back to the popularity it used to have. The Panthers beating the Owls this season would raise the morale of not only FIU’s football program, but also bring back the popularity of one of the most recent rivalries in all of college football.