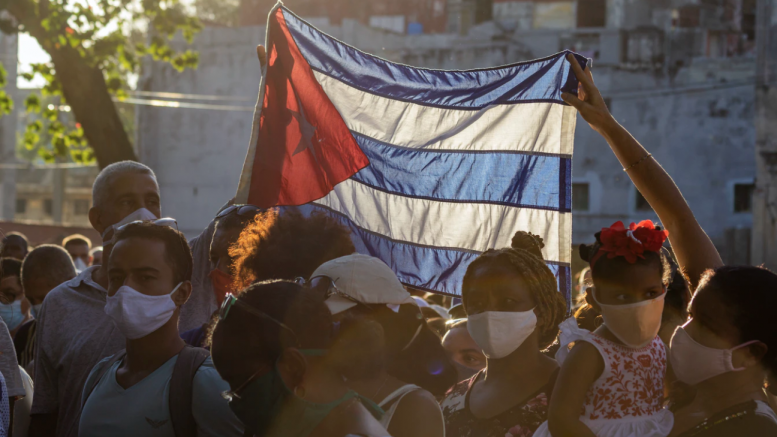 Thousands of Cubans marched the streets of the island on Sunday, in the largest demonstrations against the communist government in the last 60 years.

“No tenemos miedo,” shouted protestors who flooded the streets of Havana and at least 14 other cities.

Peaceful protestors demanded food, water and access to COVID-19 vaccines. Some looted the few food stores stocked in the island that only sell in dollars. Others faced police officers with a video showing a crowd flipping a cop car.

The act of defiance against the regime came with harsh consequences. The island’s internet access had been shut off and unofficial reports continue to pour in with counts of at least 100 missing or arrested, and several deaths and injuries, though the exact number is not known.

Miguel Diaz-Canel, the current Cuban leader, denied government repression on the island, casting blame on the U.S., claiming the protests were led by the U.S. government. Diaz-Canel also claimed that the uprisings were a result of current U.S. sanctions.

“All this discontent, these feelings of dissatisfaction, what is the ultimate cause of all that?” said Diaz-Canel at a press conference reported by the Miami Herald.

Dozens of people have been arrested in Cuba after thousands joined the protests against the island’s communist government according to BBC news.

However food shortages and a lack of vaccination delivery from the Cuban government have caused this spontaneous assembly of protestors according to professor Michael Bustamente, who studies Cuban-American relations and teaches Latin American history.

“A Lot of factors have played in leading to the demonstrations on Sunday, but they are directly challenging the Cuban government which has simply not responded to its peoples needs,” said Bustamante “they are simply fed up.”

It’s been nearly three decades since a similar demonstration occurred with the Maleconazo uprising of 1994, and about 60 years since Fidel Castro took power – a change in government that was also heavily protested. Within this history, Cuba has struggled with economic problems, migration, and government repression.

“Cuba is in the midst of its worst economic crisis in 30 years,” said Bustamente.

However, the pandemic has brought many Cubans to the breaking point. COVID-19 has severely impacted the tourism industry, which is crucial to Cuba’s economy. Lockdowns have only contributed to economic difficulties, yet there are still plenty of health problems with over 38,000 confirmed COVID-19 cases: according to the Cuban Ministry of Health.

“This is clearly an attempt to show that the previous historic leadership of Cuba still remains with the current government,” said Bustamente.

On Monday, June 13, President Rosenberg posted a statement on Twitter and Instagram affirming FIU’s support of both Haiti and Cuba, stating that FIU stands with those in Cuba who “reject dictatorship and who yearn for liberty and democracy.”

Intramural Sports Kick Summer A Off With Virtual Gaming Season