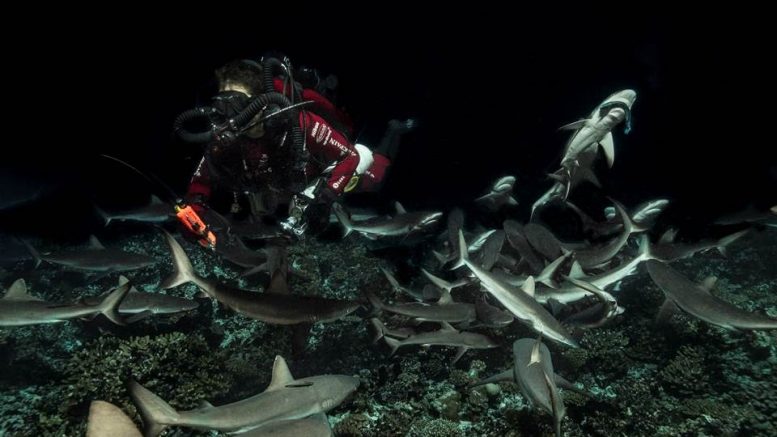 Yannis Papastamatiou, an FIU professor and marine scientist, noticed something out of the ordinary with the world’s most dangerous sharks, they hunted in packs rather than alone.

The week-long television program “SharkFest” which started streaming July 5 on Disney+, documents research on sharks including their habitats and human attacks.

Papastamatiou is one of the top shark behavior ecologists at FIU whose work has been featured on National Geographic, Discovery Channel’s Shark Week, and the British Broadcasting Corporation (BBC).

Papastamatiou’s studies were inspired by the way in which sharks behaved when it came to tracking their prey. He studied the conservation of sawfish in the everglades during his postdoctoral degree at the University of Florida, then was hired to teach at FIU in January 2016.

“When we published that paper, we got a lot of publicity so I think that’s when the film crew saw, and therefore asked me to be on the show,” said Papastamatiou.

“Each year [we get] about 10,000 black tip [sharks] migrating south to South Florida, and then they come during the spring,” said Papastamatiou. “Basically because it’s warmer down here, and then in the late spring and summer they move back north up to Georgia.”

The program discussed whether sharks were hunting in social groups or alone.

“You can see sharks hunting that fish… really is an incredible place that you want to study the predators,” he said.

Papastamatiou was able to swim among oceanic whitetip sharks which have been known to harm humans during his trip to Hawaii.

“[It] didn’t involve scuba diving, but it did involve free diving so we were snorkeling and trying to free dive with our oceanic white tips and put some tags on them,” said Papastamatiou.

Free diving requires the diver to hold their breath for the entirety of the dive, while scuba diving involves never holding your breath due to the danger of lung overexpansion or the trapping of air in the lungs.

Tagging a shark involves attaching a satellite transmitter to the fin and monitoring their movement every time they come to the surface.

Additionally, it is rare for oceanic whitetips to attack near a shoreline since they live in the open ocean at depths of 150 meters, Papastamatiou explained.

“I think the biggest misconception is that they’re out to get you,” he said. “Obviously some sharks do bite humans, that we know. But it’s a very, very small percentage.”

In the U.S. alone, 33 unprovoked shark attack cases were recorded in 2020, this was 58% of all worldwide shark attacks according to the Florida Museum Shark Attack Summary.

He brought up an incident reported during World War II, in which a naval boat was sunk by a Japanese submarine.

“But basically, their position wasn’t well known, so they sank. A lot of sailors survived the sinking and went into the water,” he said. The location of the sailors was not known due to the secrecy of the mission and it took three days to find.

“During that time, a large number of the survivors died, and [there] were reports that basically they had been killed by sharks and oceanic white chips, one of the main culprit.” he mentioned.

With advancements in technology, more recent evidence suggests that a majority of sailors may have died due to exposure to the environment, but a small number of sailors were killed by oceanic whitetips.

Although incidents like the USS Indianapolis suggest sharks are dangerous in reality it’s only partially true, he said.

“You could even go and swim around the waters with white sharks and tiger sharks around, and your chance of getting bitten is not going to be very high,” said Papastamatiou. “I’m not recommending you do it, but you would still have a very low chance.”

He emphasized the importance of shark presence in our oceans and their ecosystem.

“Healthy oceans should have lots of sharks, and I think it’s something that we’re lucky [to have] here in Florida,” said Papastamatiou. “We have a lot of sharks in the water and that’s a good thing, that means that our marine ecosystems aren’t in a terrible state.”