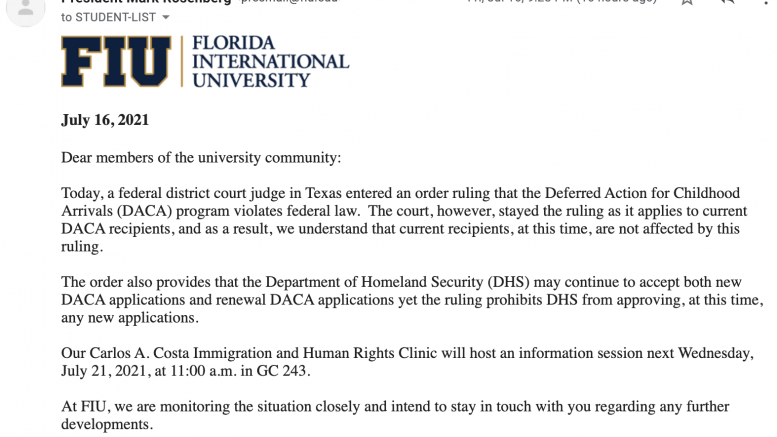 A federal Texas judge on Friday blocked the Biden administration from approving new applications under the Deferred Action for Childhood Arrivals program — current DACA recipients would be unaffected by this new legislation.

In an email sent out by President Mark B. Rosenberg yesterday, the order would allow the Department of Homeland Security (DHS) to continue accepting applications from both new DACA applicants and those renewing but restricts DHS from approving them.

The 77-page ruling, U.S. District Court Judge Andrew Hanen claimed that DACA is unlawful and that the DHS can no longer approve new applicants into the program, granting work permits and protection to more than 600,000 young immigrants brought to the U.S. as children.

Hanen referred to DACA as being an “illegally implemented program” and said, “the public interest of the nation is always served by the cessation of a program that was created in violation of the law.”

On Saturday President Biden called the ruling “deeply disappointing” and “relegates hundreds of thousands of young immigrants to an uncertain future.”

Biden said the Department of Justice would step in and appeal the decision.

He claimed that his administration would renew their efforts in passing the American Dream and Promise Act or H.R.6 bill, which would provide DACA recipients with Temporary Protected Status (TPS) and individuals with Deferred Enforced Departure (DED) protection from deportation allowing immigrants to receive permanent residency.

The Carlos A. Costa Immigration & Human Rights Clinic (IHRC), which familiarizes students with immigration law, will be hosting an information session next Wednesday, July 21, 2021, at 11:00 a.m. in GC 243.

“At FIU, we are monitoring the situation closely and intend to stay in touch with you regarding any further developments,” said Rosenberg.