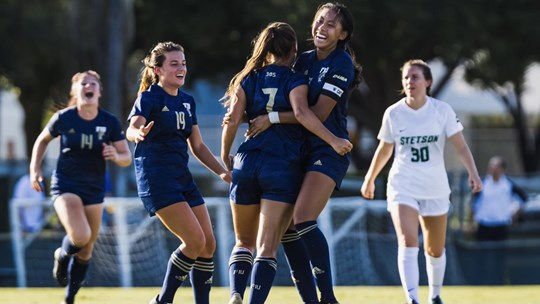 FIU Women’s soccer opened its season with its first home win of the year with a dominant 2-0 victory over the Stetson Hatters followed by a 2-3 loss against the Jacksonville Dolphins on Friday, August 20 and Sunday, 22.

With a plethora of new talent recruited for the 2021 season, the Panthers looked to improve on their 3-9 record from last season.

FIU has faced the Hatters 11 times overall, winning five, losing five, and drawing one each. Their latest encounter resulted in the Panthers falling 1-3 away at the Edmunds Center in DeLand, Florida.

The Panthers quickly took control of the match on Friday Friday, as forward Kédie Johnson passed the ball to midfielder Laia Muñoz Danon, who opened the scoreboard in the 14th minute with a stellar chip shot that floated past the Hatter goalkeeper.

Both sides struggled to create chances as Stetson were keeping the Panthers at bay despite their efforts in attack.

The Hatters’ resistance was once again broken when Muñoz Danon added to the FIU’s lead with a stellar shot outside the 18-yard box following a clever pass by forward Sydney Amparo in the 24th minute of the match to give the Panthers a 2-0 advantage before halftime.

Neither team could not add to the scoreline for the remainder of the half as the Panthers maintained their two goal advantage.

The second half proved to be an excellent showcase for what FIU can offer this season going forward. The Panthers were dominating the Hatters for virtually the entire half.

Stetson found it increasingly difficult to pass FIU’s formidable backline, which was cutting off virtually every attacking attempt by the opposing squad.

Johnson, Muñoz Danon, and Amparo were making life as difficult for Stetson as possible, as they proved a consistent threat for the Hatters in the final third. Despite an array of chances throughout the second half, the Panthers were unable to add to their lead and ultimately had to settle for a comfortable 2-0 home lead.

With the first win of the season, FIU now had to attempt to replicate that form away against Jacksonville in two days’ time.

Sunday’s matchup could not have started worse for the Panthers as two quickfire attacks by the Dolphins put FIU 0-2 down within the first three minutes.

This left the squad shell shocked as they had to quickly mitigate the damage. The Panthers tried to respond to the setback with shots from Johnson and midfielder Elli Kainulainen in the following 20 minutes to attempt a comeback.

A flurry of chances from the Panthers was not enough to get the ball over the net as both teams entered halftime with the Dolphins maintaining their two-goal advantage.

The second half saw FIU’s resilience finally pay off as they managed to half the deficit in the 48th minute with a goal by Kainluainen to make it 2-1.

Less than 15 minutes later, in the 61st minute, the Panthers leveled the scoreline with a stellar counter attack scored by midfielder Noemi Paquin to make the game 2-2.

Jacksonville only added to FIU’s momentum when one of its players earned a red card in the 68th minute to leave the Dolphins with one less player on the pitch.

Despite this numerical advantage, the Panthers struggled to create chances and once again went behind in the 86th minute following a quick counter attack that gave the Dolphins a 3-2 lead with only a few minutes to go.

Jacksonville held on to its narrow advantage to come out 3-2 victors. This result puts FIU’s overall record at 1-1.

The Panthers will look to rebound from this result when they face the University of North Florida at home on Thursday, August 26th, at 6 pm E.T.