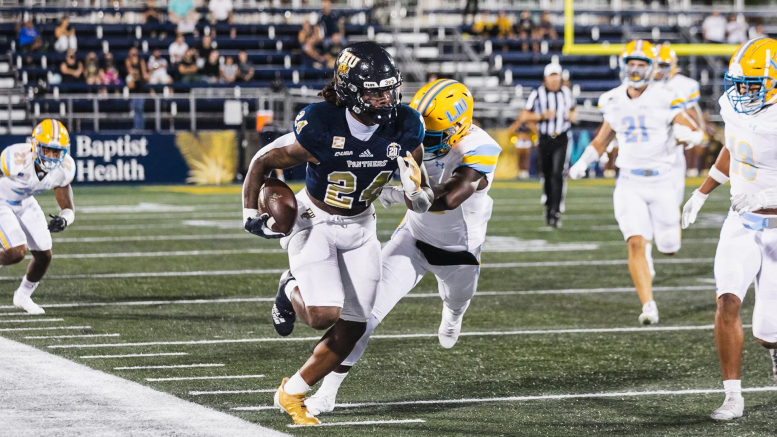 FIU Running back D’vonte Price had a career-high three touchdowns against LIU. Photo by FIU Athletics

The FIU football team began their 2021 campaign on a high note, blowing out the Long Island Sharks by a score of 48-10.

Following a disastrous 0-5 season in 2020, the Panthers underwent changes to their coaching staff, and have added multiple recruits from the South Florida area. What this team needed was a reboot, and the question of whether this team was ready or not was answered.

“It was kind of a nightmare to get ready for this season,” said head coach Butch Davis. “However, the boys played fast and played smart for almost all 60 minutes of the game. I was proud of the way the kids competed tonight.”

Both teams had some extra time to prepare, as the game was delayed an hour due to lightning in the area. Once it started, however, the skies were clear.

The Panthers wasted no time getting on the scoreboard. On their first drive of the game, running back D’Vonte Price got three carries, and led FIU to the end zone for an early 7-0 lead.

Long Island gave FIU’s defense some trouble on their first offensive drive,marching down the field. They attempted a field goal that didn’t go through, turning the ball back over to FIU’s offense.

FIU was quick to convert the turnover on downs into points. After a pass by quarterback Max Bortenschlager, Price ran the distance and scored the Panther’s second touchdown of the game, increasing the lead to 14-0 with five minutes in the first quarter.

Not to be outdone, running back Shaun Peterson Jr. was the playmaker for FIU’s next offensive drive, adding seven more points to the Panthers to finish off the first quarter with a 21-0 lead.

After the second quarter began with a pair of punts from both schools, a deep catch from Bortenschlager to wide receiver Bryce Singleton set up the Panthers on Long Island’s side of the field. Another rushing touchdown for Price raised the lead to 28-0.

Off a breakaway from Long Island’s receivers, the Sharks were able to score their first touchdown with four minutes to go in the second quarter. The Sharks then intercepted Bortenschlager on the next drive, and converted a field goal to shorten FIU’s lead to 28-10 heading into halftime.

In the third quarter, FIU started off just as hot as before, with another touchdown pass for Singleton to stretch the Panther’s lead to 35-10. On their next drive, kicker Chase Gabriel nailed a field goal to add three more points to FIU.

The fourth quarter was just as successful for the Panthers as the last. On their first drive of the quarter, a pass by Bortenschlager to wide receiver Tyrese Chambers secured 45 points for the Panthers. Their following drive was capped off with a 45-yard field goal by Gabriel which raised their score to 48-10, sealing the game for FIU.

The Panthers won their first football game since November 23rd, 2019, when they upset the Miami Hurricanes at Marlins Park. (Now LoanDepot Park)

FIU’s offense was consistent throughout the entire game. They combined for a total of 594 total yards and 22 first downs. Price rushed for 165 rushing yards and a career-high three touchdowns. Bortenschlager threw for 266 yards, two touchdowns, and an interception.

“We just gotta keep doing what we’re doing,” said Price. “We gotta move forward, and we can’t look back.”

“I think the defense played good,” said defensive back Richard Dames. “But next week, we need to play better. I think we just need to watch the tape tomorrow,and fix what we did wrong.”

The Panthers are technically tied for first place in the Conference USA Eastern Division with a 1-0 record. Only they and the Western Kentucky Hilltoppers have played a game yet so far.

The Panthers will stay at home for their matchup next weekend against the Texas State Bobcats on Saturday, September 11 at 7pm.