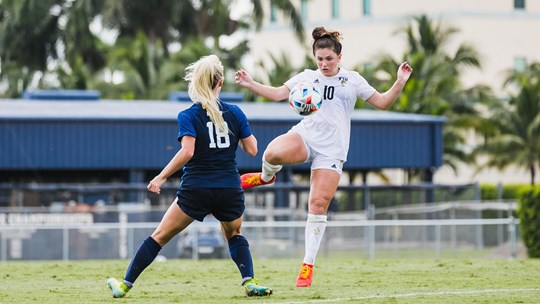 The team was once again let down by slack defending and lackluster finishing. The Panthers dominated in shots and possession, but lack of concentration from both ends of the pitch once again cost them.

FIU’s overall record is now 1-5, with their solitary win coming from their opening game against Jacksonville.

Heading into the match against the Racers, FIU came off the back of a disappointing 3-2  loss against Florida Gulf Coast University, where they showed their tenacity on the pitch to almost level the game after going 3-1 down early in the second half.

Sunday’s matchup began with both sides getting a shot in before Murray State drew first blood in the seventh minute to lead the match 1-0.

Despite this setback, the Panthers stuck to their game plan and tallied eight additional shots on goal. The Racers held firm to maintain their lead into the half.

The first half was a frustrating one for the Panthers as they clearly dominated the match but just could not find the back of the net when it mattered, an issue that has plagued them throughout the season thus far.

FIU entered the second half with something to prove and did just that within the opening minutes of the half.

The Panthers came out swinging with a goal by forward Courtney Walker in the 47th minute, her first of the season. Midfielder Sydney Amparo continued her excellent run of form by notching her third assist of the year.

FIU attempted to capitalize on this newfound momentum with a flurry of shots on goal within the next five minutes. It almost seemed inevitable that the second goal was coming.

Against the run of play, the Racers earned a shock lead in the 59th minute following a corner kick.

This lead appeared to deflate some of the Panthers’ confidence as they struggled to generate many chances following the goal.

Head coach Jonathan Garbar made a plethora of substitutions to try to rejuvenate the squad and get something out of the match. Ultimately, Murray State once again held on to its lead to secure the 3-1 victory and hand the Panthers their fourth straight home loss.

In overall shots, the Panthers had 19, with 11 on target, to Murray State’s 11 and five on target. Forward Noemi Paquin and Walker were level with three shots.

The Racer’s goalkeeper, Jenna Villacres, was kept busy as she was forced to make 10 saves compared to FIU’s keeper, Casey Kane, who made three.

While this match certainly resulted in another difficult and tough loss for FIU, there is no denying that this is a much-improved overall performance from the Panthers; especially when comparing it to previous seasons.

There is still much to improve on, such as having more communication and organization in the back and more clinical finishing, it seems like it is only a matter of time until the scoreboard finally can reflect what the team is truly producing on the pitch.

FIU will play the University of Miami at the Cobb Stadium on Thursday, September 9th at 7pm.