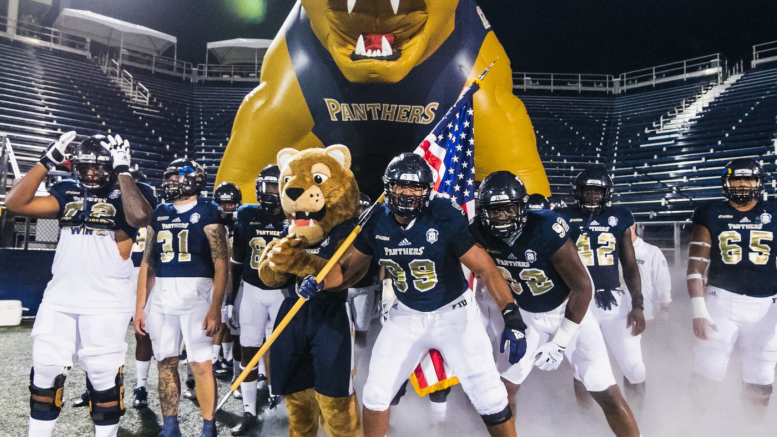 The FIU Football team walking out of the tunnel prior to their season-opening victory against Long Island. Photo by FIU Athletics.

FIU football is set to host the Texas State Bobcats on Saturday, September 11 at 7pm.

Last Thursday, the Panthers got their first victory of the 2021 campaign as they defeated the Long Island Sharks, a FCS school, by a score of 48-10. It was also FIU’s first win in over 649 days since they defeated the Miami Hurricanes at LoanDepot Park.

The game was dominated by the offense as senior running back D’Vonte Price led the way with 165 yards on five carries and three scores into the endzone. Quarterback Max Bortenschlager had a solid night going 14 of 17 with 266 yards, which was a career high in passing yards for the Maryland transfer, along with two touchdowns and an interception.

He connected with receiver Bryce Singleton who hauled in six receptions for a career best 149 yards and a TD. Another contributor was the JUCO transfer Tyrese Chambers who had 67 yards on three receptions while collecting his first touchdown as a Panther.

On the defensive side of the ball, FIU limited the LIU offense to 10 points, and the only miscue came late in the 2nd quarter as the Panthers gave up a 74-yard touchdown pass that Rishard Dames slipped on the run, which led to the score. His brother, Richard Dames led the team with six tackles.

As for Texas State, they are coming off a 29-20 season-opening loss at home to Baylor. The Bobcats kept themselves in the ballgame, but were unable to create any momentum to make a push.

Butch Davis said on FIU Panther Talk with AJ Ricketts, “Although they did not win the game, they played great against Baylor, their physicality, and effort on both sides of the ball was shown.”

Quarterback Brady Mcbride threw for 156 yards while also allowing three interceptions. Texas State was without their top back on Saturday’s loss in Brock Sturge, who had an impressive 2020 season.

He was named an Honorable Mention All-Sun Belt Conference as he led the Bobcats in rushing with 532 and five touchdowns.

Defensively, Texas State was one of the worst teams in the Sun Belt in 2020. They allowed over 38.2 ppg, 270.4 passing yards per game, and 224.5 rushing yards. However, the Bobcats brought in over 11 transfers through the portal with four of them making immediate starts on defense.

They only allowed 148 yards in the air, while giving up 238 yards on the ground. Defensive back Troy Lefeged Jr. led the team with a total of 10 tackles against Baylor and safety Zion Childress had the second most with seven tackles.

Both are going to be huge threats in trying to stop the passing game against FIU and keys to limit the running game for Price.

If FIU wants to make it 2-0 to start the season, they once again will need to rely on Price to carry their offense. He showed last Thursday why he is one of the best running backs in Conference USA, and will have to prove it once again on Saturday.

Bortenschlager will be tested against a front seven that was impressive against Baylor. The Panthers will need to find crucial ways on the run defenses to stop Sturges from getting heavy runs and also continuing to show great coverage on the Bobcats receivers.

It will also be a homecoming game for Defensive Coordinator Everett Withers who coached three seasons for Texas State from 2016-2018. He encompassed a record of 7-28 until being terminated from the position late into the 2018 season.

The game will be streamed on ESPN+ with AJ Ricketts, “Voice of the Panthers”, on play-by-play, with Patrick Murrary on analyst duties. The game can also be heard on the radio 105.5 FM in Miami or iHeartRadio with Corey Brooks on the call.