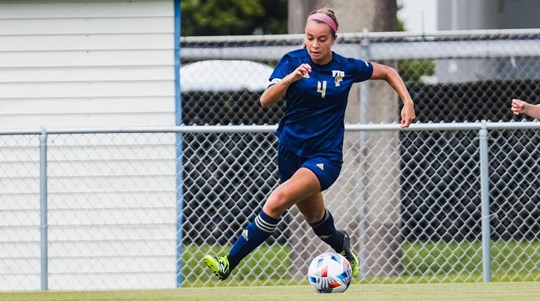 FIU Women’s Soccer concluded its non-conference matches after losing 3-0 against the Miami Hurricanes and 0-1 against the Appalachian State Mountaineers, respectively.

The Panthers head into its Conference USA opener with a 1-7 record and six consecutive losses.

Prior to Wednesday’s game against the Hurricanes, FIU held a 1-7-1 record against them, with their last victory coming in 2016. The teams’ previous two encounters resulted in UM winning 4-0 in March and 4-1 in 2018.

FIU traveled to Cobb Stadium in UM on Thursday, September 9 hoping to finally end their winning drought this season as well as their four-year losing streak against the Hurricanes.

UM proved to be a simply better team, dominating from the first whistle. The opening minutes of the match had goalkeeper Ithaisa Vinoly busy between the sticks as she saved three shots on target.

Vinoly could only do so much against the Hurricanes’ flurry of attacks as they finally broke through in the 25th minute to earn a 1-0 lead.

For the rest of the half, head coach Jonathon Garber made a flurry of substitutions to try and level the match. Ultimately, UM comfortably held on to lead the first half 1-0.

The second half started with another storm of substitutions from both teams in the opening two minutes as either side hoped some fresh legs could benefit their side.

Following the additional subs, the Hurricanes once again took full control of the game with relentless shots on goal, forcing Vinoly to make a plethora of saves.

UM doubled its lead in the 68th minute before tripling it only seven minutes later in the 74th minute to make it 3-0 with 16 minutes to go.

FIU attempted to get a consolation goal with shots from forward Kedie Johnson and midfielder Noemi Paquin but it proved for naught as the game finished with UM winning the match 3-0.

The Panthers had about two days to lick their wounds before facing off against the Mountaineers at home on Sunday, September 13.

FIU dominated Sunday’s matchup in the early stages of the game before App State slowly got its foothold on the game, with its first threat on goal coming in the 22nd minute.

Two minutes later, App State opened the scoring with a blistering shot from outside the box that goalkeeper Casey Kane could only watch as it rustled through the back of the net.

Forward Sydney Amparo had an inspired performance as she was involved with virtually every attack for the Panthers. Unfortunately for her, the Mountaineers’ backline held firm, keeping her offside for many of her attempts to get through on goal.

Despite the setback, FIU came agonizingly close to a leveler when Amparo went through on goal against the keeper but could only shoot directly at her. The ball quickly rebounded to Johnson who subsequently completely missed an otherwise empty goal.

That proved to be the Panthers’ last real chance of the half as App State held firm to maintain its 0-1 lead.

FIU came out in the second half aggressively determined to earn a draw, going all out in attack with the midfielders and attackers blitzing into the box in an effort to get a goal in the early stages of the half.

Amparo’s stellar form, yet frustrating finishing, continued as she once again was through on goal before her shot resulted in the ball rebounding off the opposing keeper, hitting the crossbar.

App State could not find an answer to FIU’s relentless pressure and was constantly losing possession. The Panthers were doing everything they could to get something out of the game but the goal continued to elude them.

The game ultimately resulted in the Mountaineers earning a flattering 0-1 victory.

FIU finished the game with 19 shots and 11 of them on target, forcing the App State keeper to make 11 saves throughout the match.

Once again, poor finishing has let the team down as they just could not take advantage of the many opportunities that they created. Better finishing would have certainly seen FIU comfortably winning.

The silver lining that the Panthers can take away from this stretch of negative results would be that the teams they faced were more experienced and overall better teams than some of the ones they will face once C-USA begins.

There is still room for FIU to perform well this season, so long as they perform as they did against App State and not against UM.

The Panthers open their C-USA season away against Middle Tennessee on Thursday, September 16 at 7 p.m. ET.