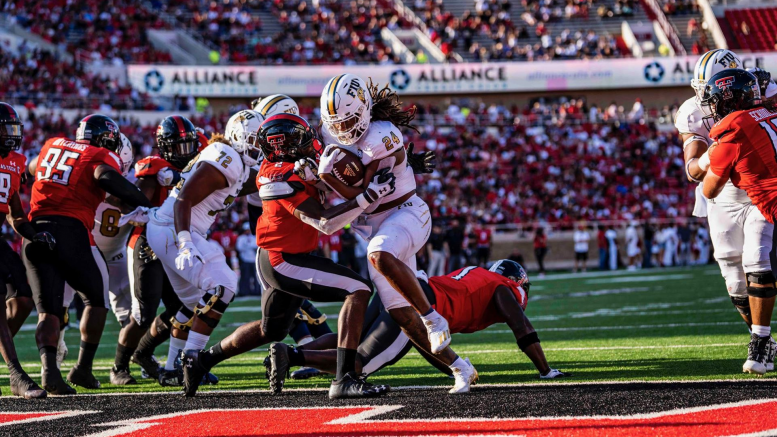 Running back D’Vonte Price went 15 carries for 55 rushing and a touchdown, which was the first score of the game. Photo by FIU Athletics

The FIU Football team fell to the Texas Tech Red Raiders in a 54-21 blowout in Lubbock, Texas. The Panthers now hold a 1-2 record for the 2021 season.

Following mixed results in their opening matches, the Panthers appeared to initially have added motivation to get a victory in the early stages of the game.

Throughout the first quarter, and five minutes into the second quarter, FIU showed every bit of aggressiveness that they can in order to match up against a Power 5 opponent, however most of the 2nd quarter proved this was not the case.

The game began with both teams punting the ball on their first drives, on the second drive, FIU got on the board first with running back D’vonte Price finding the endzone from three yards.

On the next Panther drive, FIU would punt the ball, until Texas Tech defensive back Adrian Frye muffed the punt, and wide receiver Caleb Lynum recovered the ball at the Red Raiders 38. However on the next play, quarterback Max Bortenschlager threw an interception that went right into the hands of Tech safety Marquise Waters, who went all the way for a 60-yard pick six.

After FIU got the football back, returner Lexington Joseph had a 39-yard return, putting the Panthers mid-field to begin the drive. The nine-play, 46-yard play would end with a missed field goal by kicker Chase Gabriel from the Texas Tech 14-yard line.

The Red Raiders wasted no time as they put together a 7 play, 80-yard in under three minutes with a 4-yard touchdown pass to Tight End Travis Koontz, giving Tech a 14-7 lead.

FIU responded quickly as running back E.J. Wilson Jr got a swing pass that he took 69-yards for score, tying up the game at 14. With ten minutes until halftime, Texas Tech had three consecutive drives with a touchdown, ending the first half up 35-14.

In the middle of the third quarter, Bortenschlager found an open receiver in Nate Jefferson for a 2-yard FIU touchdown making the contest 38-21, but it was too late for any comeback as Texas Tech quarterback Tyler Shough threw a touchdown pass for 25-yards to receiver Mason Tharp, Raiders would lead 44-21 at the end of the third quarter.

The Red Raiders tacked on another field goal and touchdown in the 4th quarter, finishing the game with a 54-21 victory.

Overall, the Panthers finished the game with 191 passing, and 55 rushing yards. In contrast, Texas Tech blew up the FIU defense as they had over 400 passing yards, while having 177 yards rushing with 31 first downs.

FIU quarterback Max Bortenschlager went 12 for 27, with 185 passing yards, a touchdown and an interception. Running back D’vonte Price finished the game with 15 carries on 55 rushing yards and a touchdown. Wide receiver Tyrese Chambers had his third consecutive game with over 65 receiving yards, having 71 on the night.

The Panthers will now travel to Mount Pleasant, Michigan to take on the Central Michigan Chippewas for their final non-conference opponent. Game will kickoff at noon and can streamed on ESPN+.