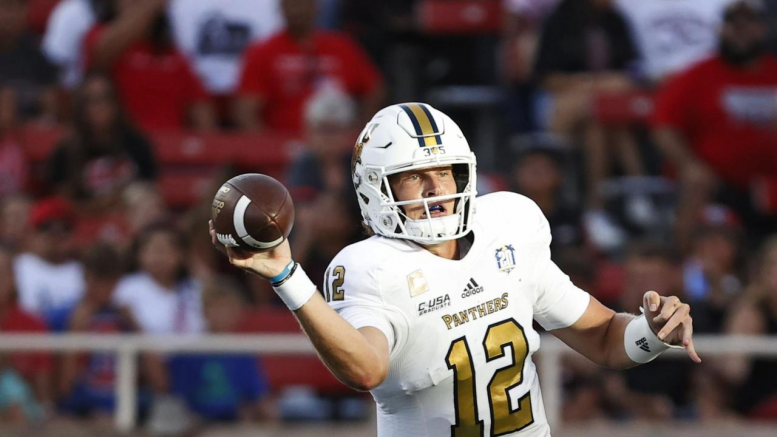 FIU quarterback Max Bortenschlager will need to step up in their matchup this Saturday. He was not sharp in the loss to Texas Tech, throwing for 185 passing yards, with two touchdowns, and an interception. Photo by Miami Herald

FIU football is set to hit the road to Mount Pleasant, Michigan for their final non-conference opponent as they take on the Central Michigan Chippewas on Saturday, September 25 at noon at the Kelly/Short Stadium.

The Panthers (1-2) are coming off a 54-21 blowout loss to Texas Tech, in which FIU took the lead early in the 1st quarter, however defensive struggles and penalties put the blame on the team.

FIU gave up 584 yards of total offense, 407 passing yards, and 31 first downs and put the Panthers in a disadvantage.

Quarterback Max Bortenschlager finished the game 12-for-27 with 185 passing yards, two touchdowns, and an interception.

“He was okay at times, he was able to extend some plays but we didn’t get open as often as we should have,” head coach Butch Davis said in an interview with Underdog Dynasty.

Running backs D’vonte Price and E.J. Wilson Jr. both had touchdowns in the loss as Price ran for 51 yards, and Wilson Jr. was found open on a pass by Bortenschlager and took it all the way for 69 yards.

Central Michigan (1-2), a Mid-American Conference school, lost to LSU last week by a score of 41-29. Washington quarterback transfer Jacob Sirmon went 17-for-24 for 156 yards with a touchdown and an interception in his first year as a starter. Overall, on the season he has thrown for 561 yards and five touchdowns.

Wide receiver Dallas Dixon has been a solid option through the air hauling in 13 receptions on 170 yards and two touchdowns. Senior JaCorey Sullivan is leading the team with 250 yards on 15 catches and four touchdown receptions.

MAC 2020 Freshman of the Year running back Lew Nichols III only had 18 rushing yards in the loss, however will be heavily relied on this weekend. In his award season, Nichols ran for 597 yards, four touchdowns, and this season has 232 yards and two touchdowns.

Defensively, the Chippewas looked solid on the passing game through the first two games only allowing 311 passing yards. Contrast to last Saturday against the Tigers, Central Michigan gave up 400 yards on the passing game, and were exposed on coverages.

Their run defense has stepped up as in their season-opening loss to Missouri they allowed over 211 yards on the ground, but have stopped their past two opponents only allowing 138 rushing yards.

If FIU wants to bounce back and get their second win before conference play begins, they are going to have to put the ball in the air, which means Bortenschlager will have to step up after a sloppy performance last week.

Wide receiver Tyrese Chambers will continue to be a deep ball threat for the Panthers and tight end Rivaldo Fairweather, whose production has been increased the past two games with 85 yards on five catches with a touchdown, will be a red-zone target.

On the defensive side of the ball, the Panthers will need to contain Nichols III, for a run defense that has given up 174 yards on the year. Penalties are going to have to be at a minimum as they have allowed for over 57 yards for the season.

The FIU pass defense, which struggled against Texas Tech, is going to have to find ways to stop Central Michigan’s explosive receivers that have made it difficult on their opponents.

The game will be streamed on ESPN+ and heard on WQBA Univision 1140 AM with AJ Ricketts “Voice of the Panthers” doing play-by-play.