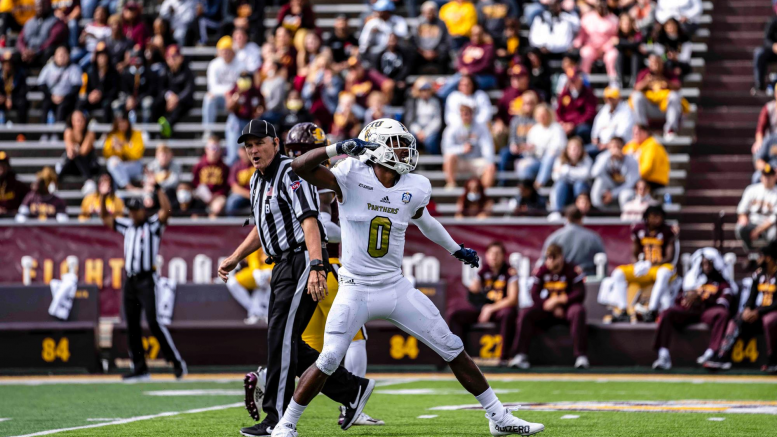 Wide receiver Tyrese Chambers is 17th in the nation for yards per reception. Photo by FIU Athletics

The FIU Football team lost on the road in Mount Pleasant, Michigan by a score of 31-27 against the Central Michigan Chippewas. The Panthers now hold a 1-3 record in the 2021 season.

It felt likely that FIU was going to get their first road win, leading 27-10 after three quarters. However, sloppy defense and questionable play calls allowed the Chippewas to score 17 unanswered points in the 4th quarter to earn a comeback victory.

The game began with both teams trading three-and-outs, until the next drive when Central Michigan marched down the field on a 11 play, 59-yard drive that ended in a missed field goal from 44-yards.

FIU continued to struggle offensively, however on the immediate defensive drive, the Chippewas got into Panther territory until defensive back Rishard Dames intercepted the pass from quarterback Jacob Sirmon in stellar coverage. Ultimately, FIU could not translate any offense from the turnover, and both teams ended the first quarter at no score.

In the second quarter, Central Michigan got on the board first with a 73-yard drive that resulted in a 35-yd field goal, making it 3-0. The Panthers responded back when quarterback Max Bortenschlager found wide receiver Tyrese Chambers open for 45 yards.

Later on the drive, Bortschlager hooked up again, this time with Chambers in the endzone for a 31-yd touchdown pass, making it 7-3.

On the next possession, FIU kept their offensive success as Bortenschlager connected with wide receiver Bryce Singleton on receptions of 11 and 75 yards that set up a 3-yd touchdown to tight end Kamareon Williams, putting the Panthers up 14-3.

After forcing another punt for Central Michigan, momentum was on FIU’s side until the ball bounced on the arm of the punt returner Singleton, and the Chippewas special teams quickly recovered the football inside the Panthers 20-yard line.

Central Michigan took advantage of the turnover as Sirmon found wide receiver Dallas Dixon for the 11-yd touchdown with the score at halftime, 14-10.

The second half began with FIU getting the ball that resulted in a punt. CMU got the ball on the next possession, which started with a 26-yd run from running back Lew Nichols III, and multiple penalties from the Panthers that put the Chippewas in field goal range, only to blunder the kick.

FIU took notice as Bortenschlager eyed Chambers for more targets that went for 45 and 24 in the air, which set up a 5-yd touchdown run for running back D’vonte Price and a 20-10 lead with kicker Chase Gabriel missing the extra point.

Two possessions later for Central Michigan, they failed to start any offensive drive, which forced them to punt, only for Dames to block the punt and take into the endzone for the score, as FIU increased their score to 27-10 at the end of the third quarter.

With 15 minutes remaining in the game and a two touchdown lead, the Panthers were in the driver seat to get the victory, however madness ensued.

After a struggling game for Sirmon, Central Michigan decided to bring in backup quarterback Daniel Richardson, who began the fourth quarter with a 10 play, 80-yard drive ending on a 15-yd touchdown reception to Nichols III, bringing the score to 27-17.

FIU quickly went on a third-and-out, giving the ball back to the Chippewas as they went on a 76-yard drive in under two minutes that ended with a 11-yd touchdown to JaCorey Sullivan, cutting the deficit to 27-24.

With 7:12 to go in the fourth, the Panthers needed to find offense to distance themselves from the surging Chippewas. Bortenschalger threw passes of over 20+ yards to Chambers, and Singleton, setting them up for a 28-yard field goal that Gabriel missed wide right.

However, the Central Michigan offense would halt as they decided to go for it on fourth-and-six, only to get a delay of game penalty, pushing them back 11 yards. Instead of punting, Chippewas head coach Jim McElwain kept his offense on the field, but failed as the pass went incomplete.

The Panthers got the ball back with the chance to seal the game, and after two solid carries by running back Price, it was third-and-two, with no timeouts left for Central Michigan. FIU elects to throw the ball, which goes incomplete and has to punt, giving the Chippewas a chance to either tie or take the lead with under two minutes to go.

Central Michigan went on a quick five play, 80-yard drive in 42 seconds that ended on a Richardson 27-yd pass to Dallas Dixon, putting the Chippewas up 31-27 with a 1:18 left.

FIU had just one more opportunity to win the game and after two Bortenschlager completions to Chambers for 24 yards and Singleton for 36 yards, the ball was spotted at the Central Michigan 18-yd line. After two incomplete passes, the Panthers had one more chance, but failed as Bortenschlager threw an interception in the endzone as the clock struck zero.

Offensively, Bortenschlager threw for a career-high of 395 yards, on 20-for-37 with two touchdowns and an interception. Tyrese Chambers and Bryce Singleton had career afternoons in the loss.

Both hauled in six catches each with Chambers going for 175 yards, and a touchdown, while Singleton had 173 yards, with his 75-yd catch being the longest of his college career. Running back D’vonte Price struggled against the Central Michigan run defense as he had 17 carries for 50 yards and a touchdown.

Defensively, defensive back Rishard Dames showed out, going for five tackles, a sack for loss, an interception, and blocked punt recovered for a touchdown. DBs Richard Dames and Dorian Hall both led the team with 11 tackles each. Linebacker Josh Powell had seven tackles including one tackle for loss.

Next up for the Panthers is a trip to Boca Raton to begin Conference-USA play taking on the rival Florida Atlantic Owls in the 20th annual Shula Bowl on Saturday, September 26. Kickoff is set at 3:30 pm and can be seen on the Stadium Network.