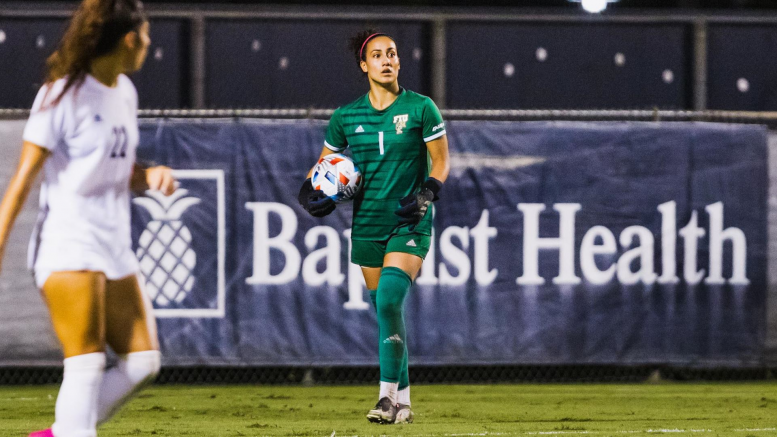 FIU Goalkeeper Ithaisa Vinoly was part of the eight saves that the Panthers had for the night. Photo by FIU Athletics

Last Friday, the FIU Panthers competed against the Marshall Thundering Herd in Marshall University’s Stadium and neither team was able to score any goals.

FIU’s record for the season so far is 1-8-2, and their last win was in their season opener against the Stetson Hatters. This is the second straight game that has ended in a draw for FIU, coming off a 1-1 tie with the Florida Atlantic Owls on September 19.

WIth their record, FIU is currently in second to last place out of the seven teams in the Conference USA Eastern Division, only above Marshall.

Following the half-time break, FIU was given a chance to do a penalty during minute 47.

Midfielder Laia Muñoz Danon was the player in charge of performing the penalty, and after she kicked the ball, Marshall’s goalkeeper was quick enough to catch it, keeping the game scoreless.

Marshall earned a corner during minute 64, creating another opportunity for a goal, but Vinoly stopped the ball again. Defender Reagan Bridges performed several shots aiming for a goal, but failed to score any.

During minute 58, forward Kédie Johnson aimed a shot for the net, but she missed, and just six minutes later, she was awarded a yellow card.

On minute 66, FIU made another change, bringing in forward player Sydney Amparo in substitution for Johnson. Defender Camille Sahirul was given the second and final yellow card for FIU during minute 71.

Forward Noemi Paquin had a chance for a goal during minute 79, but she missed, and only three minutes later, Amparo tried to score but also failed.

The game went into overtime, where more shots were taken, however the goalkeepers from both teams managed to dodge some shots and cover their teams. The match concluded in minute 110.

Both teams took 16 shots at the net. The Panthers had four shots on goal, while Marshall doubled the amount. During the match, both teams received yellow cards, however no red cards were attained. FIU made eight saves on defense, while the Herd only made four.

The Panthers will head back home to take on the Charlotte 49ers on Friday, October 1 at 7pm.