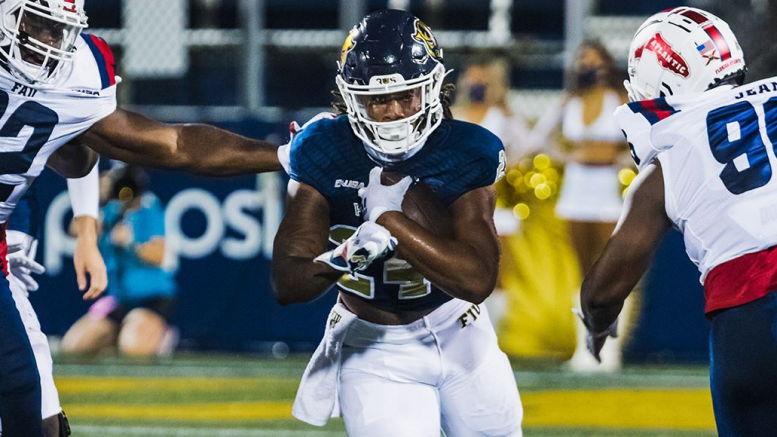 FIU Running Back D’Vonte Price rushed for 179 yards and a touchdown in last year’s loss to FAU. Photo by FIU Athletics

One of college football’s newest yet classic rivalries is set to begin again this Saturday, November 2, as FIU will head to Boca Raton to take on the Florida Atlantic Owls.

The Shula Bowl has been an annual matchup between both schools since 2002. It’s transcended just football, as any matchup between FIU and FAU in sports is treated with the highest regard. Even the colleges themselves and their students always find ways to one-up each other. For more information on the history of the rivalry, click here.

As of late, the rivalry has been dominated by the Owls. They currently hold the all-time record against the Panthers- 14 of the 19 matchups total. This includes last year’s 38-19 rout, which was one of FIU’s five losses last season.  Their last win in the series came all the way back in 2016.

More recently, the Panthers are on a current three-game losing streak spanning back to their 17-23 loss against the Texas State Bobcats. Two more losses against the Texas Tech Red Raiders and the Central Michigan Chippewas have dropped FIU’s record to 1-3 on the season.

They currently sit in fifth out of the seven teams in Conference USA, only above the Old Dominion Monarchs and the Middle Tennessee Blue Raiders.

FIU had some success on both offense and defense in their loss against Central Michigan, holding a 27-10 lead heading into the fourth quarter. However, a late surge by the Chippewas and a lack of defense on the Panther’s part allowed CMU to score 21 unanswered points to complete the comeback win.

FIU quarterback Max Bortenschlager completed 20 of his 38 pass attempts for 395 yards, two touchdown passes, and an interception. Running back D’Vonte Price rushed for 57 yards and a touchdown, while wide receivers Tyrese Chambers and Bryce Singleton both rushed for over 170 yards. Chambers is second in the nation with yards obtained per reception, with 26.13 total.

Florida Atlantic hasn’t fared much better this season as they currently have a 2-2 record. They lost their season opener to the Florida Gators and their most recent game against the Air Force Falcons, but have beaten the Georgia Southern Eagles and Fordham Rams.

FAU is led by their senior quarterback N’Kosi Perry, who played his first three years with the Miami Hurricanes. So far this season, he’s achieved 949 passing yards and seven touchdowns, but has been sacked 12 times. He’s a solid passer who can also escape the pocket with his rushing abilities when it collapses.

On the defensive side of the ball, both schools are even. FIU has recorded more sacks, but FAU has converted more interceptions. The Owls have caused more fumbles, but the Panthers have recovered more fumbles. For FAU, look out for safety Teja Young and defensive end Jaylen Joyner- both players lead the team in sacks and interceptions, respectively.

Overall, this should be an even game. Both offenses and especially defenses share a lot of similarities in their levels of talent and playstiles. A win for FIU will probably be determined by how well Price performs and if the Panthers can convert on third down, and how preventative FIU’s defense is against Perry and FAU’s success on third down.

The game will begin at 3:30pm, and can be watched on the Stadium Network, which can be watched online at https://watchstadium.com/live/ and is also part of Sling TV, YouTube TV, and other streaming services. You can also listen to the game on Univision’s WQBA 1140 AM in Miami.