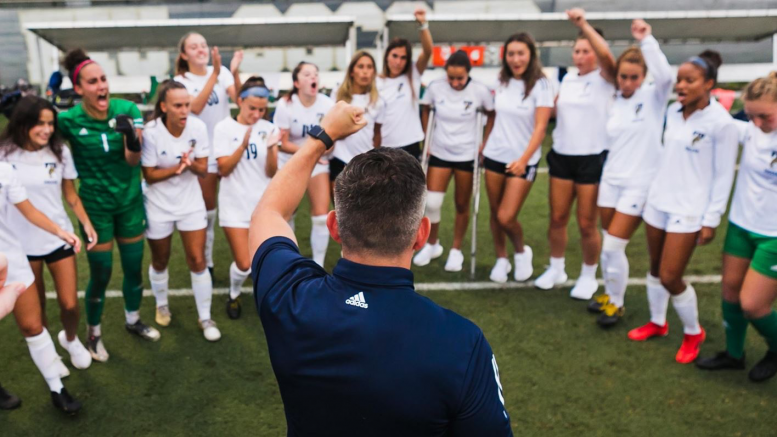 The FIU Women’s Soccer Team in a pre-game huddle. Photo by FIU Athletics.

The FIU Panthers were defeated at home by the Charlotte 49ers on Friday night in a 1-4 blowout.

The last time these two teams played again​​st each other, FIU lost 1-3 in Charlotte. Dating back to 2013, the Panthers have never been able to win a game against

FIU’s record now drops to 1-9-2, and they haven’t beaten a Conference USA opponent yet this year. The Panthers are currently in sixth place out of the seven teams in the C-USA Eastern Division.

The game started intense from the first whistle as both teams played defensively. For Charlotte, midfielder Julia Patrum scored a goal in minute six, giving the 49ers their first lead of the game.

Only ten minutes after the first goal from Charlotte, midfielder Michaella Artetabroke through and scored the 49ers second goal of the day, increasing their lead to 2-0.

During minute 25, FIU forward Sydney Amparo attempted a shot at the goal, but the 49ers goalkeeper managed to deflect it in time. Midfielder Dominique Marcelli aimed for a shot shortly after, but also failed.

After making 3 substitutions and receiving a foul, FIU scored a goal on minute 41. Forward Noemi Paquin was the author of FIU’s first and only goal, heading into halftime.

Midfielder Macey Bader gave the 49ers their third goal during minute 66 to extend their lead to 3-1. In minute 70, midfielder Piper Biziorek scored another goal for Charlotte to seal the game with a 4-1 lead.

FIU decided to make two players substitutions after the pair of goals, and on minute 81, midfielder Laia Muñoz Danon made a shot on goal, but was unable to score. After this, FIU received another foul and made two more substitutions before running out of time.

Neither team received red or yellow cards during the game, but Charlotte took five shots on goal compared to the Panther’s two shots. Both teams received four fouls and a single save from each team’s goalkeeper.

FIU will hit the road and travel to Denton, Texas, for a matchup against the North Texas Mean Green on October 8 at 7pm.