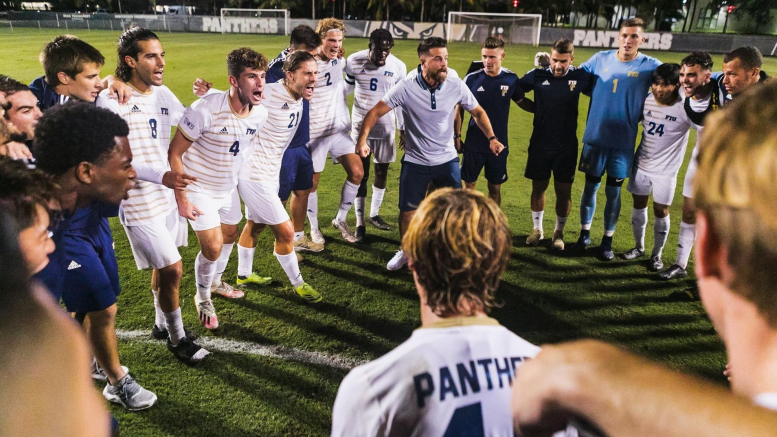 The FIU Men’s soccer team demolished the Charlotte 49ers 4-0 on Saturday, October 2 in front of a near capacity crowd.

This was the Panthers first ever win against the 49ers. The record against Charlotte now reads 1-8-2 all time.

The Panthers now hold an overall record of 7-1-1 and a perfect conference record with two wins in their first two C-USA games. FIU is the only team in the conference with two or more conference wins.

FIU continued their trend of starting games with high pressure on the opponents goal. After a skillful run through the midfield from midfielder Yushi Nagao, he passed the ball into the feet of forward Stephen Afrifa who beat a defender and slotted the ball into the bottom corner to give the Panthers a 1-0 lead in the fifth minute.

The high pressure was sustained by the Panthers following the goal, barely allowing the 49ers a touch of the ball. Dictating the tempo of the match, FIU reloaded and launched another onslaught onto the Charlotte goal.

In the 18th minute, the Panthers scored their second goal. Afrifa made a darting run behind the 49ers defense and fired a ball across the box that forward Bernardo Dos Santos Monteiro nestled into the back to double the lead.

Sending five shots at the Charlotte goal in the next twenty minutes, the Panthers third goal came from an unlikely source. After a clearance from the 49ers on an FIU corner, defender Kareem Riley connected on the clearance 40 yards away from the goal and the shot looped over the keeper and landed in the back of the net making the score 3-0 in the 40th minute.

Heading into halftime with a 3-0 lead and an 11-1 shot advantage, the Panthers came out in the second half and controlled the remainder of the game. FIU added a fourth goal to their lead in the 72nd minute. Midfielder Mauro Bravo reacted to a loose ball in the box and smashed it into the net to make it 4-0.

Overall, it was an intense affair with a total of 26 fouls and 10 yellow cards issued throughout the game. The Panthers collected 14 of the fouls and received half of the yellow cards given out.

Next up for FIU is a trip to Lexington to take on the Kentucky Wildcats on Sunday October 6 at 6pm. The Panthers hold a 6-7-2 all time record against the Wildcats.