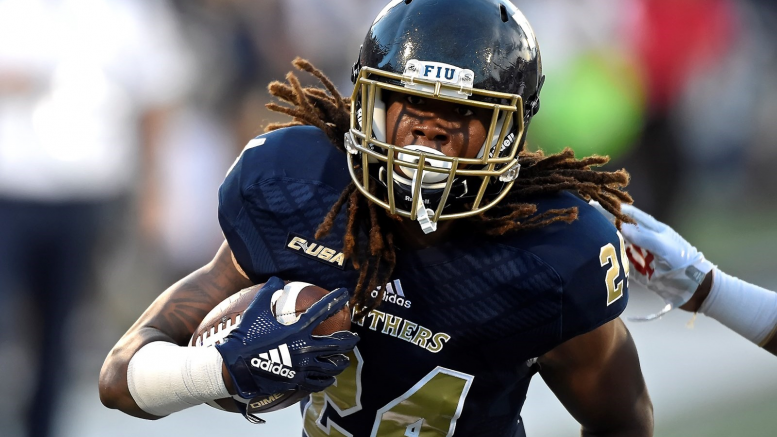 Running back D’vonte Price will look to bounce back on Friday night after rushing for 135 yards in his last three games. Photo by FIU Athletics

FIU football will look to end a four game losing streak as they take on the Charlotte 49ers on Friday, October 8 at 7 p.m. at the Riccardo Silva Stadium.

The Panthers (1-4) are coming off a 58-21 blowout loss to their rivals, the Florida Atlantic Owls, in the 20th annual Shula Bowl. This is FIU’s fourth consecutive loss dating back to their 23-17 loss against the Texas State Bobcats on September 11. They currently sit dead last out of the seven teams in the Conference USA Eastern Division.

FIU gave up 704 yards of total offense, 408 passing yards, and 296 rushing yards that the Panthers defense could not keep up with.

Quarterback Max Bortenschlager finished the game 12-for-23 with 263 passing yards, two touchdowns, and an interception. Wide receiver Tyrese Chambers and running back D’vonte Price both had touchdowns in the loss as Chambers hauled in a one-handed grab that he took it all the way for 68-yds and Price punched in for a one-yd score that was set up by receiver Bryce Singleton’s 57-yd reception.

Charlotte (3-2), a C-USA opponent, is coming off a 24-14 loss to the Illinois Fighting Illini on the road in their final non-conference opponent. Quarterback Chris Reynolds, a 2021 Maxwell Award Watch List nominee, went 17-for-23 on 191 passing yards, two touchdowns, and an interception.

Overall, he has thrown 11 touchdowns, and three interceptions on the season with two of starts going for over 300 passing yards.

In the air, Reynolds has two solid pass catchers in Victor Tucker and Grant Dubose. Tucker, a Miami Gardens native is a third-year leading receiver with 340 receiving yards on the year and two games this season with 100-yards receiving.

Dubose, a transfer from Division II, is coming up on 400 receiving yards on the year, while also having two games of 100-yards receiving.

On the ground, running backs Shadrick Byrd and Calvin Camp split the carries for the 49ers, and both have combined for 505 rushing yards, and three touchdowns on the season. They average 144.2 rushing yards per game, which is 70th in the nation.

Defensively, Charlotte is statistically one of the worst run defenses in college football, having allowed over 277 rushing yards to their opponents. However, on the passing side they have looked impressive, only giving up 206 passing yards per game.

Defensive end Markees Watts, who is considered one of the top defensive ends in Conference USA, has made 36 tackles, including three sacks. Linebacker Tyler Murray leads the team with 38 tackles, and has already forced two fumbles in the season.

If FIU wants to end their four game losing streak, they are going to need a bounce back game from D’vonte Price. After rushing for 276 yards in his first two games, he has struggled with 135 rushing yards through the last three games. With an equally struggling run defense for Charlotte, it is imperative that the running game needs to get back on track.

Bortenschlager will have to continue to throw the deep ball as he leads the nation in passing yards per completion. Chambers will be his main target once again with Chambers also leading the nation in yards per reception.

The Panthers defense will need to step up after giving up 58 points to FAU, and find ways to limit giving up plays of 20 yards or more that have hurt the FIU secondary. Defensive lineman Davon Strickland will look to have a major bounce back game against a 49ers team that has been mediocre on the rushing side of the ball.

Historically, FIU is 5-0 in their matchups against Charlotte dating back to 2015, when the series between both teams started. Their last win came on October 12, 2019 in a 48-23 win for the Panthers. Worth mentioning, the 49ers have struggled on the road as they have an 0-2 record this season, and a 3-9 record since 2019.

The game can be watched on the CBS Sports Network and listened on WQBA Univision 1140 AM with the FIU Football Radio Network.