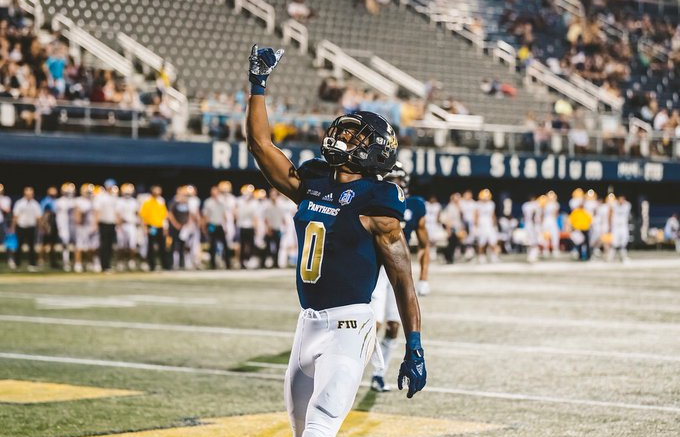 Tyrese Chambers had 201 receiving yards and two touchdowns in the loss to Charlotte. He currently leads the nation in receiving yards with 672 yds and yards per reception with 33.60 yds. Photo by FIU Athletics

Looking to snap a four game losing streak, the Panthers returned home against Charlotte trying to get back to their winning ways. However, their streak extended to five after a 45-33 loss to the 49ers.

“I was really proud of the fact that they fought their hearts out the entire game” head coach Butch Davis said postgame. “Score looked like it was going to get out of hand, and then they came back and made a play, they kept fighting.”

Currently, FIU (1-5) sits dead last out of the seven teams in the Conference USA Eastern Division with an 0-2 record and has yet to beat an FBS opponent since November 23, 2019.

The game began with FIU getting the football first, and marching down the field to the Charlotte nine-yard line, only to settle for a field goal that kicker Chase Gabriel made from 26-yards, giving the Panthers the early 3-0 lead.

Charlotte got the ball next, and after a 60-yard kick return for running back Shadrick Byrd, the 49ers took advantage of their special teams by ending the drive with a touchdown for running back Calvin Camp, making it 7-3.

After three failed attempts trying to put the ball in the endzone, the Panthers decided to go for it 4th-and-2, only to turn the ball over on downs.

On the next two drives, both teams would punt the ball and Charlotte led 7-3 at the end of the first quarter.

The second quarter began with Charlotte having the ball, and  scored on a 11-play, 80 yard that took six minutes. It ended with quarterback Chris Reynolds finding tight end Taylor Thomphson for the score, giving the 49ers a 14-3 lead with 9:16 in the second quarter.

As FIU started to struggle on offense, quarterback Kaylan Wiggins would enter the game, trying to initiate a consistent offense. He would stay in the game for one drive where he would run for 21 yards on two carries. However, the Panthers stalled at the 49ers 26-yard line, only to kick a field goal that cut the deficit to eight.

On the final drive of the second quarter, Charlotte tacked on three points to their lead for a four minute drive, making the score 17-6 at halftime.

The second half began with the 49ers getting more points on the scoreboard, this time with quarterback Reynolds throwing a 22-yd pass to receiver Victor Tucker, extending their lead to 24-6.

FIU responded quickly on a  2-play, 75-yd drive that ended with a 50-yd strike to receiver Kris Mitchell, bringing the score to 24-13.

Both teams then punted on the next drives, until Charlotte got back on the scoreboard with a 1-yd touchdown pass from Reynolds to tight end Jake Clemons, ending the third quarter at 31-13.

With the Panthers down 18 with fifteen minutes to go, the offense was looking for to chunk plays to get back in the ballgame and they did just that as on their first possession of the fourth quarter, Bortenschlager threw a deep ball to Chambers for a 59-yd score, that made it 31-20.

FIU defense would hold the 49ers offense to punt, and the Panthers had the opportunity to start a comeback. However, Bortenschlager threw on 3rd-and-8 an interception at the FIU 22-yd that Charlotte safety Jon Alexander took all the way for a pick-six, increasing the lead to 18.

Immediately on the next possession, the Panthers scored on a 75-yard touchdown reception from Bortenschlager to Chambers once again making it 38-27 with 5:45 left in the fourth quarter.

However, with time left for FIU to make a stop on defense and score to get back in the game, Charlotte put the dagger for any comeback as they went on a six play, 44-yd in a three minute drive that ended with a 4-yd touchdown pass to tight end Ryan Carriere, bringing the 49ers lead to 45-27.

The Panthers put up one more score with 0:14 seconds left as tight end Sterling Palmer caught a touchdown 8-yd pass as the game ended 45-33.

Overall, quarterback Max Bortenschlager threw a career high in passing yards with 466 yards and touchdown with four as he completed 19-for-30 on his passes. Running back D’vonte Price ran for 89 yards on 18 carries to surpass 2,000 yards for his career, and sits fifth for most rushing yards in program history.

Receiver Tyrese Chambers had a career game as he hauled three catches for two touchdowns and 201 receiving yards, which is tied for the most receiving yards in a single game in program history that was originally set by T.Y. Hilton in 2011.

“Growing up as a kid watching players like T.Y., and when I first came here, I always tried to make an impact in this school the way he did.” Chambers said postgame.

Defensively, FIU gave up 378 yards of offense with 199 yards in the air and 179 yards on the ground.  However, the main struggles came from the special team as they allowed over 139 yards on kickoff returns.

“We did a very poor job and very bad for our defense that twice they had to go on the field after a 50, 55-yd kickoff return across the 50-yard line and that’s awful against a good offensive football team” Davis added. Next for the Panthers is a bye week, and then will play at home on October 23rd, as they take on the Western Kentucky Hilltoppers in the annual Homecoming game. Kickoff is set for 7 p.m. and will be broadcasted on ESPN3 and heard on WQBA Univision 1140 AM on the FIU Football Radio Network.