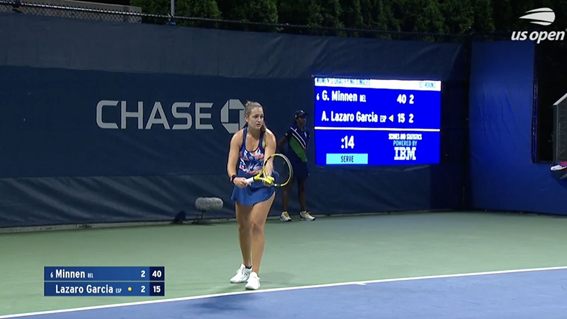 Andrea Lázaro (26) preparing to serve in her US Open first round game on August 24, 2021, at Court 13 in New York. Photo by FIU Athletics

Andrea Lázaro, a Spanish tennis player and a former FIU Panther, completed a recent set at the U.S. Open in New York on August 24.

Lazardo matched up against Greetje Minnen from Belgium. In this tournament, players with lower rankings compete in a qualifying phase in which they try to win a total of three matches in order to gain a spot in the final phase.

Minnen closed out the match in two sets, 6-3 and 6-2. Despite the loss, Lázaro put up solid statistics that reflected her time at FIU. She had a 70% effectiveness in the first service, committed five double faults and got 58% of the first service points.

She also managed to save nine of the opponents 13 break points and won a total of 48 points throughout the game, from which 34 of them were won when serving.

In an interview with FIU Athletics, she stated “I am very proud of FIU, they gave me everything. They gave me a scholarship and the opportunity to play tennis, get a degree and the chance to compete after that. I am very proud to call myself a Panther.“

Since her departure from FIU, Lázaro has pursued her career as a professional tennis player and has travelled all around the world competing in many different tournaments both in the ITF and WTA circuits.

“Since I graduated in 2018, I´ve put a lot of work every day on court, practicing, going to tournaments… I´ve just put my life into it, I give everything everyday,” said Lázaro in an interview with FIU Athletics.

Prior to her loss in New York, Lázaro had previously played in Budapest in which she reached the last qualification match. But a loss by 6-3, 3-6 and 2-6 stopped her from competing in the final phase of the Hungarian WTA 250 tournament.

WTA 250 tournaments are a series of tournaments organized all around the world by the  WTA Tour women’s tennis association. It is considered to be the fourth best tennis category to compete in just after GrandSlams, WTA 1000´s and WTA 500´s.

She will now travel to Lisbon, Portugal to compete in an ITF tournament to keep developing herself as a professional tennis player and reach her goals of this 2021 season.