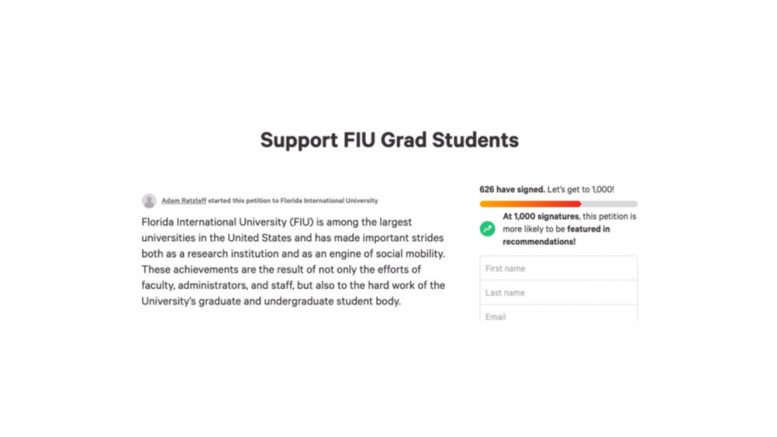 University graduate assistants who felt underpaid and ignored started a petition calling for higher stipends, reduction of graduate fees, a housing program and a graduate student union with bargaining power.

The petition, started in late August, has raised over 600 signatures, with comments condemning the University’s lack of financial support for graduate assistants.

Graduate assistants are considered “fully funded” graduate students, meaning the university provides them a yearly stipend while they pursue their coursework, research as and teach some undergraduate courses in their department. They are barred from pursuing external employment that isn’t relevant to their studies and approved by the university.

The ban on secondary employment is only one of the complaints leveled against UGS policy; other complaints regard the low stipends and that graduate assistants generally feel unsupported through their academic career.

The university covered his tuition and provided him a $20,000 annual stipend.

Ratzlaff said that after speaking with fellow graduate students, he realized many of them were facing the same problem: not being able to afford the cost of living in Miami on their stipends.

“I was just sick of hearing how my classmates weren’t able to make it and that there just wasn’t any motion on these issues,” said Ratzlaff.

The University Graduate School did not agree to speak with PantherNOW, but provided a list of written answers to our questions.

UGS says that they were not aware of the petition, but they had seen Ratzlaff’s first opinion piece.

Tensions between graduate assistants and UGS have developed for years.

Criticisms around the low assistantship stipends had been brought up to the University Graduate School (UGS) numerous times. In 2019, PantherNOW wrote about low graduate wages and the conditions it forced graduate assistants to live in.

On Sept. 8, shortly after the petition was posted to Change.org, UGS associate dean Lidia Kos sent out a memorandum detailing initiatives the school would pursue in the fall, including a 3.5 percent raise for all PhD assistants earning below $26,000.

The memorandum also said it would allow for graduate students to take on external employment opportunities relevant to the student’s studies, with permission from the school. However, it specifically excluded international students from pursuing external employment.

“Based on the numbers FIU provided, this raise would amount to a $705 to $910 increase in annual stipends, which amounts to about $60 to $76 dollars [more] per month,” wrote Ratzlaff.

Miami has become increasingly unaffordable since the start of the pandemic, when the city saw a major influx of tech workers from places like New York and California. This has placed significant pressure on an already high-cost housing market, and raised the cost of living.

A single adult in Miami needs to make $33,144 a year to afford living in the city, according to MIT’s living wage calculator.

Graduate assistants at FIU make between $20,000 and $27,000, with the lowest wages coming from the School of International Politics and Affairs and the highest from the College of Engineering and Computing.

Ratzlaff spent the 2019 fall semester trying to speak with administration about reworking some of their policies for graduate assistants, such as increasing stipends, lowering graduate fees and allowing external employment.

In 2019, UGS provided a stipend raise and said stipends would rise on a continuous basis. However, stipends did not rise again until the September 8 memorandum.

UGS claims that after the 2019 raises, health insurance costs subsequently rose which is what stopped them from providing raises year after year.

Faced with financial hardship at the start of the pandemic, Ratzlaff requested to take another job. UGS requested that Ratzlaff take a leave of absence instead.

The school did not allow him to be both a graduate assistant and work as many hours as he needed for another employer.

After the spring of 2020, Ratzlaff took a leave of absence to pursue the other job, but he continued to challenge the university on the policy barring secondary employment.

He never returned to the assistantship, choosing to continue his degree without university funding.

As a result, Ratzlaff felt secure enough to publicly push back against the university for graduate student interests. He published his opinion piece, “The Math of Being A Graduate Student” and began to circulate the petition.

At Florida State University, graduate assistants are allowed to pursue external employment as long as it does not constitute a conflict of interest or conflict with a student’s coursework.

Bailey Bond, a PhD student studying engineering and computing education, reached out to Kos over email for clarification over the Sept. 8 memorandum. Kos wrote that Bond would have to find work that benefitted her studies if she were to get external employment.

“You can’t just get an easy part time job that could really help you support yourself and improve your conditions a little bit,” said Bond. “I would love to be able to just bartend on the weekends or something but it’s not possible–you get kicked out.”

“Bartending might not directly improve or contribute to my degree, but having the money would mean I’m not worried about my rent or my groceries or feeding my kid…[if] you’re no longer worried about how you’re going to keep the roof over your head, you’re going to be a lot more dedicated and focused on the work that you’re doing,” said Silverthorn.

UGS defended their policy on external employment, which they said had been described as “inaccurate”. Graduate assistants are allowed to find part-time secondary employment with the approval of the Major Professor, Graduate Program Director, and GSU as long as it does not conflict with their studies and contributes to their degree.

The fundamental interest of UGS is to have students progress and complete their studies in four to five years. However, students have already pointed out the problems with this policy.

“I know of many students who are afraid to speak out about the situations that they face for fear of what it will mean,” said Ratzlaff.

University graduate assistants say they are forced to take work under the table or take out loans to cover basic necessities like housing, transportation and food. Some don’t look to the administration or their advisors for support for fear of consequences.

Tamanisha John got her PhD in International Relations from FIU and is now a professor at Clark Atlanta University. She called the FIU graduate assistant stipends “poverty wages.”

“Once I ran out of money paying rent, I had to ask my mom and uncles for money because…I couldn’t afford food,” John said. “I did take up jobs that were off the books, but only because if I didn’t do that, I literally wouldn’t be able to eat.”

UGS claimed they are trying to offer as competitive of stipends as possible, but they’re dealing with “budget realities”.

“We want to have among the highest stipends because it will be good for our students and makes our programs more competitive in recruitment. […] Health costs have increased by 40% since 18/19 and we have absorbed those costs, which means we have increased how much we invest on the graduate students with assistantships, but it is not necessarily visible to the students.”

Despite the generally low stipends, Graduate students are still expected to pay for fees, which were quoted at around $890 a semester. They also pay a 25 percent of the monthly cost for their annual health insurance premium, $591 for the year.

Randi Spiker is a PhD student studying psychology. She moved to Miami from Missouri with her two teenage kids and husband to attend FIU.

“Health insurance is a small expense at FIU. The premium I pay every month is very reasonable…but it’s not great health insurance,” said Spiker. “For specialty things, I struggled to look for care off campus. Most places don’t take it. And then you have to pay an exorbitant amount of fees and a huge deductible.”

Spiker also said the health insurance does not offer dental or vision coverage. She said that a graduate student she knew waited a year to see a specialist, due to them being the only one who took the school health insurance policy.

Other problems regard general systemic issues at FIU.

Graduate students assert that UGS is understaffed and can’t provide necessary support for the students. A high turnover rate as a result of low wages leaves gaps in different chains of command, making getting things accomplished an elongated process.

Susannah Barr, a PhD student in the Global Sociocultural Studies department, mentioned that Texas A&M University has an entire department for graduate assistantships. At FIU, it’s one person: Betty Sigler.

“[Sigler] is responsible for over 2000 people’s sources of income,” said Barr. “There is a problem every single semester with someone somewhere, and she is one person. She does not have the support she needs.”

Policies, such as exemptions due to  the death of a family member or pursuing external employment, are unclear and often on a case by case basis.

Angela Albanese, pursuing her PhD in history, lost her grandparents, an aunt, and a professor during her studies.

“I just had to keep working. I didn’t really get a moment to stop and breathe because I had student papers to grade. Obviously, that’s the real world,”  Albanese said. “But at the same time, there should have been a clear policy of ‘If this happens while you have time sensitive work, we have policies to help catch you’.”

Some graduate assistants have developed an informal group to begin to bargain with administration for better conditions.

On Sept. 30, the group, along with the Graduate and Professional Student Committee of SGA, drafted the Graduate Student Awareness and Well Being Act (GSAW Act) to call for higher stipends and better support for graduate students.

UGS claimed that they would continue to focus on timely graduation, finding additional funding for stipends, as well as “finding as many alternatives as possible” for housing options in the city.

UGS also said they had secured 20 apartments at The One for incoming students receiving an Inclusion, Veterans, or McKnight fellowship. Students are chosen randomly for the free housing option.

Despite these efforts, the rifts have been made apparent.

“The way that [FIU] views the graduate students is that we are a combination of cheap labor and […] an afterthought to the broader mission of the university,” said Ratzlaff.

Graduate students struggling to get by in Miami on University stipend