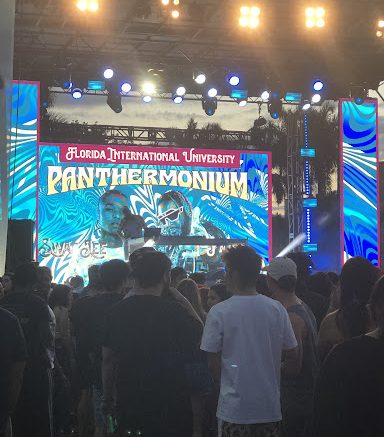 Panthermonium is one of the most anticipated Homecoming events. This year’s concert included headlining acts T-Pain and Swae Lee.

Each FIU student had to reserve tickets before the event. Community members were allowed entry for $20.

Doors opened at 6 p.m and students were ready to enter as the line was already long.

Activities were set out for students to enjoy, including a photo booth and various food trucks. Free shirts and stickers were also being handed out.

Students were very excited about the artists performing this year. They anticipated when they would come on stage and got their spots early.

“I love T-Pain. I’m excited for the early 2000’s music, and this is my first homecoming,” states freshman Isabella Kingsley.

For many students, Panthermonium is one of the first concerts they’ve attended since the start of the pandemic. “[I am] excited to dance, have a good time, and getting a free concert ticket to do that feels pretty good,” states student Valentina Lirusso

At 8p.m. T-Pain came to perform on stage. He performed hits including “Buy U a Drank” and “I Like Dat.” The crowd sang every word and got on each other’s shoulders to see the stage better. He also performed a few covers including “Don’t Stop Me Now” and “All Of Me,” which surprised the audience but was met with singing along.

He didn’t leave the stage until the audience chanted for him to sing one of his most well known songs, “Bartender.” T-Pain danced the whole way through and engaged with the audience by cutting the music, letting them sing parts of the song.

Students took a break before Swae Lee came on stage at 9:15. Swae Lee started off strong, having students mosh and jump at the beginning of his set. He performed songs such as “Unforgettable,” “Sativa,” and a crowd favorite,“Sunflower.”

Swae Lee made sure the energy was high the whole set, using strobe lights and fog machines. He interacted with the audience by changing parts of his lyrics to include “FIU”.

He threw water bottles to the crowd, making sure everyone was doing well. During a short technical difficulty, he took time to ask students their majors, and take pictures with their phone.

“T-Pain opened up the show really well, and then Swae Lee just surprised me so much, I didn’t expect him to be such a great performer all together,” states freshman Joseph Morales.

He continues by saying, “it was awesome to see the way the crowd came together, seeing FIU come together as one and have a really good turnout.”

T-Pain and Swae Lee mentioned their appreciation for being there and hoping to come back to FIU soon.