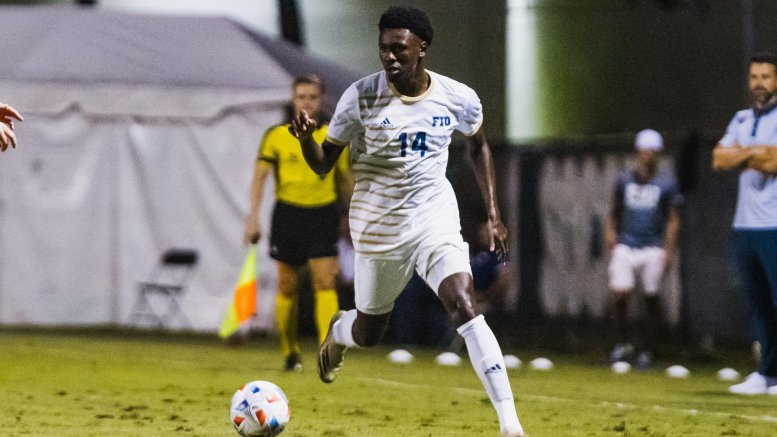 The Panthers now hold a 3-10-4 all time record against the Gamecocks. FIU outshot the Gamecocks 20-12, with 12 of the 20 shots being on target. This is the fourth time the Panthers scored four or more goals in a game this season.

The 14th ranked Panthers now go top of the table in Conference USA with a 3-0-1 record and an overall record of 8-1-2. FIU has scored 27 goals this season while only conceding seven goals in the 11 games played.

The first half started with both teams firing off shots early. Seven shots were taken in the first 20 minutes but neither team could convert. The breakthrough came for the Gamecocks in the 25th minute when defender Kareem Riley gave away a penalty that South Carolina converted to make the score 1-0.

It didn’t take long for a response, just seven minutes after conceding  FIU produced a minute of magic, scoring two goals in 50 seconds. Forward Bernardo Dos Santos Monteiro scored his fifth goal of the year and seconds later midfielder Talla Faye bagged his third goal of the season. The score remained 2-1 for the Panthers as the referee blew his whistle for halftime.

Just three minutes after the second half kicked off, the Panthers put another ball in the back of the net. Forward Rasmus Tobinski calmly finished his chance to extend the lead to 3-1.

Relentless in their pursuit of a fourth goal, FIU scored again in the 65th minute. Forward Stephen Afrifa scored his team-high seventh goal of the season to seal a blowout win.

Dos Santos Monteiro and Faye both picked up assists to go alongside their goals. After committing 33 fouls in their last two games, the Panthers only committed eight fouls in the South Carolina match.

FIU returns home for their next match, taking on the Coastal Carolina Chanticleers on Tuesday, October 19th at 7p.m.. This is the first matchup between the two sides. The Chanticleers are C-USA newcomers and currently sit second behind the Panthers in the conference standings.