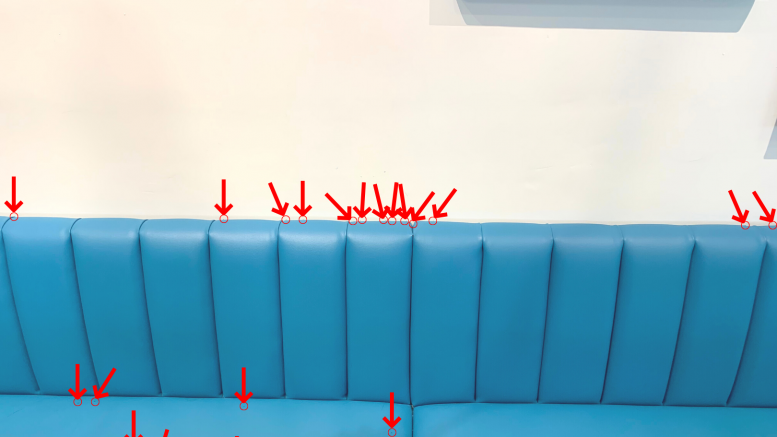 Since the start of the fall semester, students have reported the presence of an ant colony in the seats of the Barnes & Noble Cafe at the Modesto Maidique Campus that has disrupted studying, socializing and relaxing in the area.

Despite management efforts to exterminate the ants, the colony persists.

“When you are trying to study or eat there, [the ants] are definitely a distraction that make you not want to lean back and relax while you study,” said Sebastian Betancourt, a student studying computer science, who started to notice the ants during his first week on campus. “I always have to [sit] upright.”

The ants are especially prevalent in the first and longest section of seating in the cafe next to the staircase. Students have seen them crawling along the top of the backrest, often in groups of 10 to 15.

Zinny Lom, manager of the Barnes & Nobles Cafe, said his team was aware of the problem three weeks ago following a customer complaint, and placed a work order for Toro Pest Management to exterminate the ants.

Lom said an exterminator from Toro came during the week of Sept. 27 for the first time.

PantherNOW contacted Toro Pest Management and did not receive a response.

“[The ants] are not good for our customers, our employees or anyone that is in the store and I would like for it to be resolved as soon as possible,” said Lom, who wasn’t present the day of the extermination.

However, three weeks later, the ants remained an issue.

On Oct. 15, another exterminator came to lay additional traps, according to Lom.

“It’s a little bit disturbing that there were ants all over the place where someone is sitting,” said Nichole Calle, a senior majoring in biology. “The kitchen is kind of far away [from the ants], so it is not a big deal to me.”