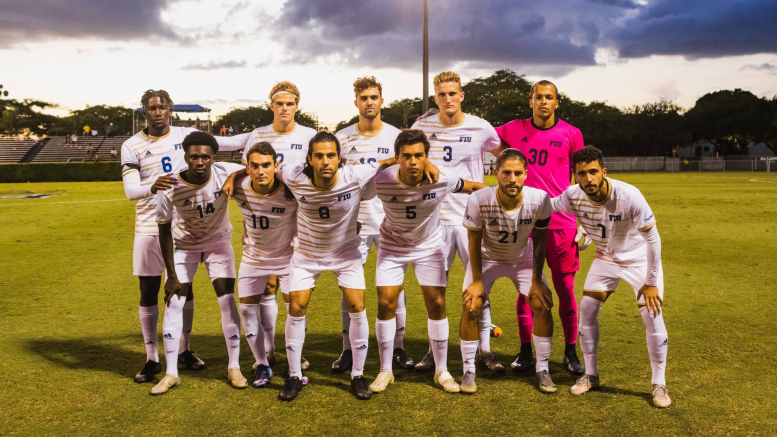 Panthers head coach Kyle Russell spoke about the importance of defending home field in a post-game interview with PantherNOW.

“Oh it’s massive, when we see on the schedule that we are playing at home there’s almost this sigh of relief, like we’re at home, we are going to come out a little bit faster, a little bit better,” Russell said. “The guys love playing here.”

After the fifth home victory of the season, FIU’s record improves to 9-1-2 and their 4-0-1 conference record is the best in C-USA. Since the loss to Bowling Green, the Panthers have dominated, out scoring opposition 18-3 in the six games since the defeat.

This was the first meeting between the two teams, but there is plenty of history between the two. Russell spent 14 years at Coastal Carolina as both a player and a coach. He said it was a special win against his former team.

In the first half, Coastal Carolina put pressure on the Panthers goal early. In the third minute the Chanticleers striker rounded keeper Tyler Hogan and fired a shot on goal that defender Kareem Riley cleared off the line.

Fifteen minutes in, the Chanteeclers sent a shot wide after an errant back-pass from Panther defender Edgar Aguliar. In the 28th minute the Panthers came alive and nearly scored the first goal of the game. A free kick from Julian Hodek sailed over both the Coastal Carolina keeper’s head and the head of Riley.

The Chanticleers broke through the FIU defense in the 31st minute after a freekick was sent into the box that Coastal Carolina smashed into the back of the net. The Panthers nearly responded instantaneously as forward Rasmus Tobinski’s header sailed just wide and bounced off the post. The score remained 1-0 heading into halftime.

The Panthers put pressure on Coastal Carolina the moment the referee blew the whistle to start the second half. FIU fired multiple shots at the Cahnteeclers goal in the first ten minutes but were unable to convert.

In the 57th minute the Panthers nearly leveled the score again after a header from a corner kick went inches over the bar. In the 78th minute Tobinski connected on another header that bounced off the post. Just seconds later forward Stephen Afrifa sent a shot inches wide after midfielder Maruo Bravo drilled a cross into the box.

After nonstop pressure for over thirty minutes, the Panthers got their breakthrough and were awarded a penalty in the 84th minute for a handball on a Coastal Carolina defender. Riley confidently stepped up to the penalty spot and buried the ball in the bottom right corner to level the score.

The Panthers refused to settle for overtime and took the lead moments later. Hodek delivered a corner kick to the back post that defender Carlos Sheckerman volleyed into the bottom left corner to secure a dramatic last minute victory for FIU.

Russell spoke about the team’s resilience when playing from a losing position and the feeling that they only need one goal to open the flood gates.

“We’ve been in this position before, we don’t want to go down a goal but we did, and it doesn’t matter, we stick to our principles, stay disciplined and stick to the plan” Russell said. “At any point once we get one [goal], another one can follow very quickly.”

The Panthers outshot the Chanticleers 19-12 and took 11 corner kicks throughout the game. 21 fouls were committed, with Coastal Carolina collecting 12 of them as well as five of the seven yellow cards handed out.

Next up for FIU is a C-USA showdown at home with the Old Dominion Monarchs on Friday, October 22nd, at 7 p.m. The Panthers hold a 7-3 all time record against ODU and have beaten them 5-0 in their last two matchups.