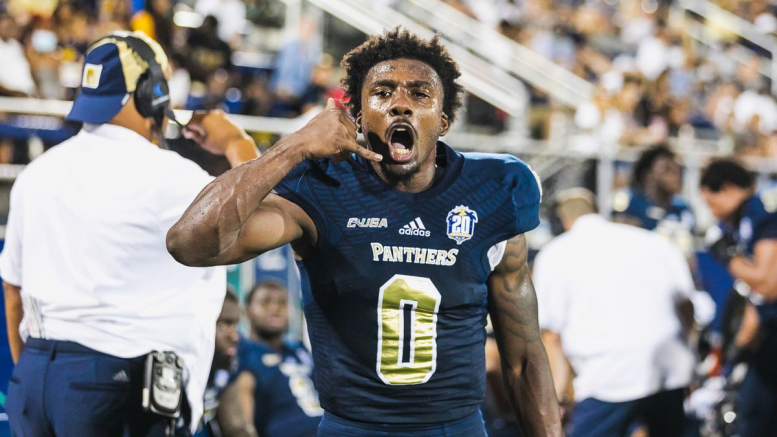 Tyrese Chambers currently leads the nation in yards per reception with 33.72 per catch. Photo by FIU Athletics

Three years ago, Tyrese Chamber slept in a laundry room at his junior college in Kansas, not knowing if he would have an opportunity to play Division 1 football. Now, Chambers is FIU’s top wideout for the Panthers and ranks second best receiver in Conference USA.

The 6-1, 185 pound sophomore leads the team in receiving yards with 672 and in touchdowns with six, while also leading the NCAA in yards per reception.

“So far I am really enjoying the experience at FIU, but I know that my game is nowhere I want it to be, and I will continue to get better.” Chambers said in an interview with PantherNOW

Chambers is a confident-yet-humble person who uses motivation and doubt from others as ways to become a better football player, which has translated his succession to the gridiron in his first season on the D1 level.

Chambers’ motivation stems from others as ways to become a better football player, which has translated his succession to the gridiron in his first season on the D1 level.

Chambers grew up with his single mom and two younger siblings in Baltimore, Maryland, a city notorious for its high crime rate.

“It was extremely dangerous, and being from Baltimore you deal with a lot of stress, depression which was pretty tough for me, and I had to grow up early at a young age,” Chambers said.

The football field was a safe space for Chambers. He began playing the sport at the age of eight with the Rosedale Cowboys, a youth program in Baltimore, where he won four championships.

“Being on the field kind of took me away from the ugly stuff that has been going on in the city, and gave me an opportunity to clear my mind,” said Chambers.

In high school, Chambers played for Baltimore Polytechnic Institute, and his talent stood out in his senior season. He hauled in 51 passes for over 1,100 yards and 17 touchdowns in 10 games and was one of only two wide receivers to make the USA Today’s Maryland first team-all state list.

However, Chambers got little attention from Division 1 programs.

“Being first team-all state, I thought it was going to be easy getting offers from schools but ultimately it was not, “ said Chambers. “ it kinda rubbed me the wrong way and I had a chip on my shoulder that I still have to this day.”

Instead, Chambers went the junior college route. First enrolling at Tyler Junior College in Texas for a semester and then transferring to Fort Scott Community College in Kansas. In Fort Scott, he achieved a 3.6 GPA in the classroom, and only participated in spring ball.

At one point, Chambers had to sleep in a laundry room for two weeks because his dorm was not ready.

“I felt that the JUCO experience is definitely not for everybody, and it really showed who loved football or not,” Chambers added. “Being in the middle of nowhere, and having to provide for myself without being fed the right nutrition, or in the correct living facilities, but yet overcoming this showed the importance football is for me.”

After redshirting his freshman year at two different junior colleges, an FCS program in the Sacred Heart Pioneers, offered Chambers a scholarship to play for their private university.

Once Chambers got onto the field, he became an instant playmaker for the Pioneers offense.

He caught 51 passes for 811 yards and eight touchdowns in just 11 games. In his sensational freshman season, Chambers was named an FCS All-American and a Jerry Rice Award finalist, which is given to the freshman of the year in FCS.

“My experience at Sacred Heart was really fun, and I went there with a chip on my shoulder because even me going there, I still had some adversity coming from a JUCO background.” Chambers said. “This came with proving myself, whether that’s in the classroom, in the community or on the field, just doing everything I possibly could to stand out, so that opportunities like this (going Division 1) presented itself to me.”

Following his breakout season with Sacred Heart, Chambers decided it was time to enter the transfer portal, and the interest from FBS programs came in. He was receiving offers from UTSA, Ball State, Coastal Carolina, Toledo, and UTEP.

Initially, Tyrese committed to UTSA in July of 2020, but would later decommit his offer. Instead, he signed with FIU in December during the early signing period.

“FIU was a place where I could stand out more, and needed some type of explosiveness on offense, which I felt that I was going to fit in better here” he said.

Upon stepping onto the Modesto A. Maidique Campus, Chamber faced some challenges with his new team.

“I kinda struggled a little bit with the playbook before the season started with a new offensive coordinator and receivers coach, and had to find ways to remember the plays, “ said Chambers. “Another big thing was adapting to my new environment, but also making new relationships with my teammates, which is super important for me.”

Once the 2021 season began, Chambers made an initial impact on the field for the Panthers.

In his first six contests, he has already had a pair of performances with over 175 receiving yards, and recorded at least one catch for over 37 yards in each game.

With his early season success, Chambers was added to the Biletnikoff Award, which is presented to the top receiver in the FBS.

In FIU’s matchup against the Charlotte 49ers on October 8 in a nationally televised game, Chambers proved to the nation his rising stock as a receiver. He caught three receptions for 201 yards and two touchdowns, which is tied with former FIU receiver T.Y. Hilton for the most receiving yards in a single game.

Ironically, Hilton is one of Chamber’s favorite receivers and has always looked up to him for his incredible skill on the field.

“After coming to FIU, I always thrived on trying to make an impact in this school the way he [T.Y] he did, and maybe I will break the record next game, or try my best too,” said Chambers.

Butch Davis, FIU football head coach said, “He [Chambers] has been one of the most enjoyable players that I have ever recruited. He’s got great energy, always has a smile on his face, and is constantly making the big, explosive play for our team.”

In addition to his game on the field, Chambers has been heavily involved with NIL (Name, Image, & Likeness) which allows college athletes to earn money through their appearances through sponsorships and deals.

“Besides having an email blaster and graphic designer, I do all NIL deals on my own and have been really enjoying it. Chambers said. “Just being able to make a few dollars, taking care of the small things like a phone bill, which I believe NIL is a big step in college football.”

Currently, Chambers has NIL deals with a local Mexican restaurant in Miami called Taco Time, a partnership with massage gun company named Hydragun, and has just released his own set of merchandise through his own website.

The receiver that was doubted by many schools and sought just an over thought is now thriving in South Florida starting to make a name for himself in the college rankings.

Chambers and FIU will host the Western Kentucky Hilltoppers in their Homecoming Game on Saturday, October 23 at 7 PM.

“My approach in everything that I do is to always have great energy, stay positive because I believe it plays a big part, whether I am on or off the field.”