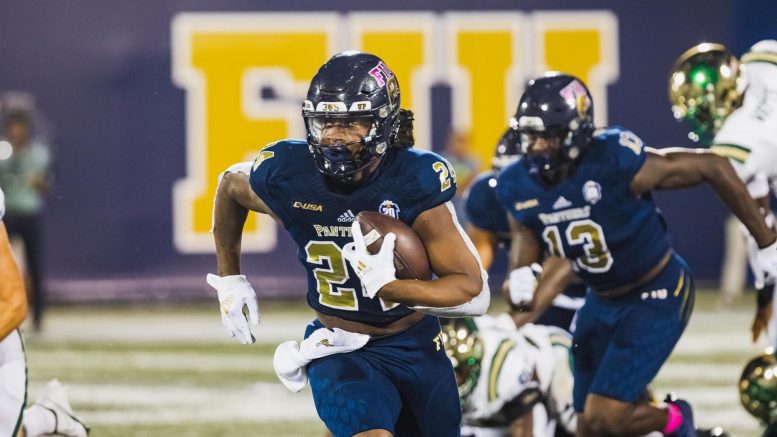 FIU Running Back D’Vonte Price rushed for 89 yards off of 18 carries in the Panther’s loss against Charlotte. Photo by FIU Athletics

The final day of Homecoming for FIU will end with a 7pm matchup at the Riccardo Silva Stadium between the Panthers and the Western Kentucky Hilltoppers.

For FIU, they’re running out of time to get the team back on the right track before it’s too late. The Panthers are sitting with a 1-5 record, including two straight losses to Conference USA opponents.

FIU’s only win of the season came in week one against the Long Island Sharks, and three of their losses were by double digit points. The Panthers are currently in sixth place out of the seven teams in the Conference USA Eastern Division, only ahead of the Old Dominion Monarchs.

There’s a multitude of reasons for the collapse of the Panthers this season, but some of the more common ones include the lackluster play calling on offense, especially on third down, as they’ve only converted 35% of third downs so far this year.

In addition, the receivers for FIU have sometimes struggled to catch the ball. Out of 191 passes thrown, only 103 have been caught, with a good percentage of the 88 incompletions being from dropped passes.

FIU’s defense has been subpar. Four of the Panther’s five losses featured the opposing team scoring 30 or more points- they gave up 54 points against Texas Tech, 31 points against Central Michigan (Including 21 unanswered points in the fourth quarter), 58 points against Florida Atlantic, and 45 points against Charlotte two weeks ago.

Other setbacks for the team include 44 team penalties resulting in a total of 439 given yards, a -6 turnover ratio, and four lost fumbles. Fans have pointed the blame on the FIU coaching staff, including head coach Butch Davis.

If the Panthers were to claim bowl eligibility, they would need to win at least five out of the last six games on their schedule, which includes Saturday’s game against WKU. With matchups against opponents. Anything is possible, but FIU needs to turn their ship around and fast.

FIU and Western Kentucky have met three times in football, with the Panthers winning the first two. The Hilltoppers earned their win in 2020, being part of FIU’s five losses in the shortened 0-5 season.

Western Kentucky has not fared much better than the Panthers this season, boasting a 2-4 record, with their two wins being against the Tennessee-Martin Skyhawks and the Old Dominion Monarchs. Their losses came against the Army Black Knights, Indiana Hoosiers, Michigan State Spartans, and Texas-San Antonio Roadrunners.

The Hilltoppers feature a pass-oriented offense that doesn’t run the ball that often. Their quarterback, Bailey Zappe, has thrown for 2,632 passing yards and 26 touchdowns, with four interceptions and seven sacks. Statistically,

Zappe’s primary receiver is Jerreth Sterns, who has recorded 962 receiving yards and eight touchdowns. Aside from Sterns, four other receivers for WKU have recorded over 100, 200, 300, and 400 yards.

WKU’s leading rusher is Adam Cofield, who has 229 rushing yards and three touchdowns on the season. This is a category that the Panthers have the advantage in, as running back D’Vonte Price has earned more rushing yards (500) and touchdowns (six).

For the most part, WKU’s defense is more efficient than FIU. While both teams have the same amount of recorded sacks with 10 each, the Hilltoppers have 37 more tackles (466 to 429), more interceptions (four to one), and more forced fumbles (five to two).

On paper, the Hilltoppers have the advantage in the game. Their offense is efficient in both driving the ball down the field as well as scoring in the red zone. However, if FIU can halt their passing game, their inexperienced rushing game might have to come into play, which could spell disaster for the Hilltoppers.

The Panther’s offense has had its moments. Quarterback Max Bortenschlager and wide receiver Tyrese Chambers are a deadly connection, producing 672 yards and six touchdowns this season. Combine the dynamic duo with a solid performance by Price and the rest of the receiving core, and FIU can walk away with a Homecoming win.