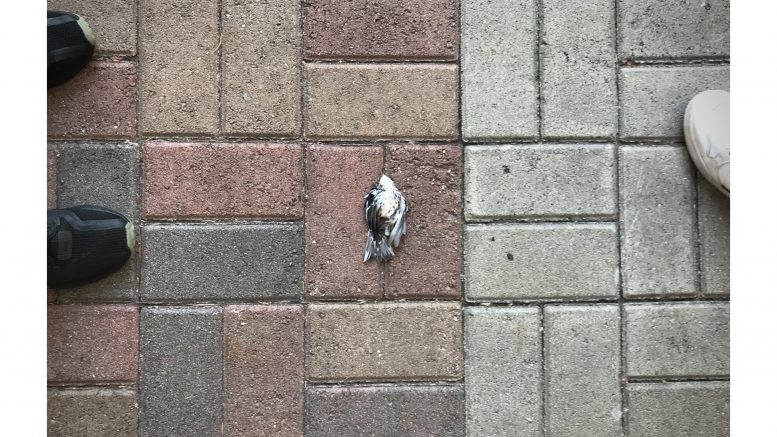 Deceased bird lays on ground outside of the Green Library (GL) at MMC after crashing into a window. Jesse Fraga / PantherNOW

Birds are falling from the sky due to South Florida’s deadly light pollution and toxic plants. An FIU student is on a mission to save the birds.

In a bustling city like Miami, light pollution distorts birds’ vision, causing them to crash into buildings and steer off-course. Jennifer Quintero – who studies sustainability and environment, and public administration – found many crashes result in immediate death, spinal injuries and head trauma.

“I held one in my hand and they are so little, you feel so much for them,” said Quintero. “They are working so hard just for their efforts to be for nothing, I feel like everyone can relate to that.”

Quintero began her research at the beginning of the fall semester, searching for dead birds at the Modesto Maidique Campus (MMC) two days a week. She catalogs each bird’s unique species with the date, time and location it was found.

Within two months, over 30 deceased birds were found, with the majority due to flying into windows, she found.

Each year, over one billion birds in the U.S. die, or are seriously injured due to these collisions, according to Portland Audubon, a wildlife research center.

The goal of her research is to identify which buildings on campus kill the birds most frequently and which species are most affected. She’s found the carcasses of yellow-throated warblers, black-throated blues and northern parula.

“My end goal is that if the research is successful, this can be implemented in all of the universities,” said Quintero.

Bird lays lifeless on ground at MMC after striking a window. Courtesy of Jennifer Quintero.

Some plants on campus, like the Brazilian pepper, also interfere with their flight, explained Jim Riach, a professor of Earth and environment.

“The fruits have a paralytic property that makes birds feel and fly drunk,” said Riach.

Paralytic properties cause loss of motor function in several muscles in the body.

Scientists believe birds have an internal GPS system which allows them to navigate at night by relying on the stars and sun, according to National Geographic.

Those who manage to avoid crashes fly around the window until they eventually die from exhaustion, according to the Miami New Times.

However, reducing light usage using window blinds can help save them, according to Lights Out Miami, a nonprofit campaign which aims to reduce birds’ window strikes.

The campaign “encourages all homeowners and commercial building managers in Miami-Dade County to [pledge] to reduce bird collisions.”

The site recommends turning off unnecessary lighting – especially those on upper floors – between 11 p.m. and sunrise. Closing window shades or blinds and utilizing light timers is also beneficial.

Quintero also urges those who find dead birds on campus to take a picture and report their findings to go.FIU.edu/BirdStrike.

She emphasized the importance of sustaining South Florida’s biodiversity, or variety of living organisms.

“The more we let these tragedies happen, the less likely you are to ever see them. Do you want to live in a world where we don’t have migrating birds?” said Quintero.

Students: Join a club that challenges you to find yourself