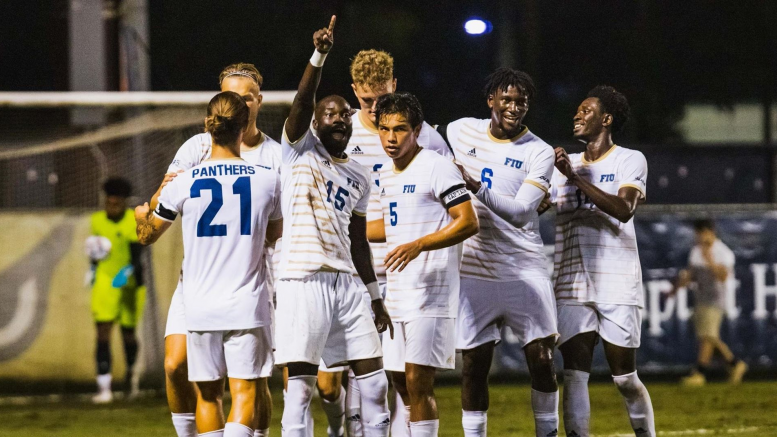 The Panthers celebrate after one of their three goals against ODU. Photo by FIU Athletics

FIU men’s soccer defeated the Old Dominion Monarchs 3-2 on October 22 to claim their tenth win of the season and remain unbeaten in conference play.

Following the victory FIU’s record now sits at 10-1-2, and their conference record of 5-0-1 remains the best in C-USA. With two conference games remaining, the Panthers are in pole position to finish top of the table over the defending national champion Marshall Thundering Herd.

The all-time record against Old Dominion now sits at eight wins and three losses. The Panthers have won seven of the last eight matches between the two. FIU has scored 13 goals in the last three games against the Monarchs.

“Overall the mission was to get a win and to stay undefeated in the conference and that mission was accomplished,” Russell said.

The Panthers pressured the Monarchs early on, firing off two shots in the first five minutes of the game. In the 15th minute midfielder Maruo Bravo sent a deflected shot from Forward Stephen Afrifa into the back of the net to give FIU the lead.

The Panthers kept their foot on the gas for the rest of the half, in the 33rd minute FIU was awarded a penalty that defender Kareem Riley blasted into the top right corner to extend the lead to 2-0.

Two minutes after the second goal, the Panthers added a third goal. Defender Carlos Sheckerman scored his second goal in as many matches, pushing the score to 3-0. FIU controlled the remainder of the half and went into the break 3-0 up.

Four minutes into the second half the Monarchs scored, reducing the lead to two. A hotly contested half, Old Dominion grew more comfortable and continued to pressure the Panthers goal and in the 87th minute they won and converted a penalty to reduce the scoreline to one. FIU was able to keep the lead for the final three minutes  and won the match 3-2.

A hard fought physical victory, there was a combined 33 fouls, with the Monarchs committing 21 of them. There were eight yellow cards shown and the Panthers collected five of them. FIU outshot Old Dominion 15-10.

Next up is the biggest road game of the season as the Panthers travel to South Carolina to take on the sixth ranked Clemson Tigers on Tuesday, October 26 at 7pm. This is the first meeting between the two schools.

Russell said the players are all going to be ready to battle against the Tigers and that these big games are what a lot of these guys look forward to.

“Clemson’s a good team, they are up there with Kentucky, Marshall and us, so it’s going to be a good game,” Russell siad. “We are excited to go up there and chop up the conference play a little bit, it’s a little bit of C-USA vs ACC.”