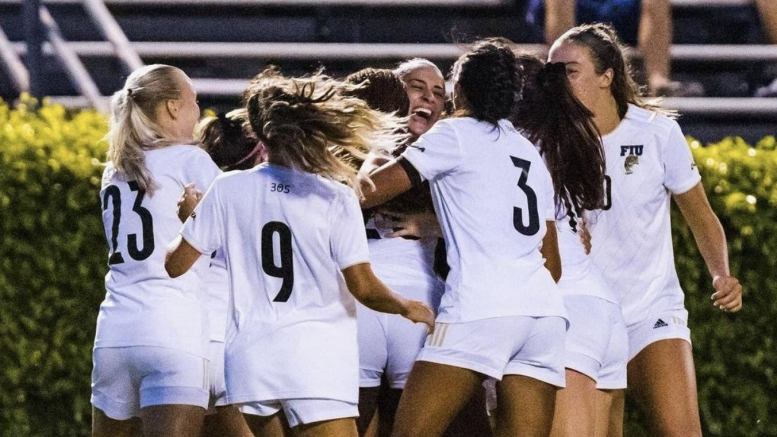 The FIU Women’s Soccer team made a comeback victory against the Old Dominion Monarchs on the road for the first time since their season opener against the Stetson Hatters.

With a 2-11-2 record and only one game left this season, the Panthers will not participate in the Conference USA tournament, but the win will provide morale for a team that hasn’t performed up to their pre-season standards. Old Dominion was the first ranked team in the C-USA Eastern Division.

The game started off for FIU on a good note, with a player from ODU attempting a shot at goal during the first minute, however goalkeeper Ithaisa Vinoly saved the shot.

In the ninth minute, FIU forward Noemi Paquin attempted a shot on goal, but failed to hit the target. However, on minute 11, the Panthers broke through, taking the lead of the game. Defender Estefania Cardona made an attempted pass that deflected off a Monarchs player, which resulted in an own-goal.

FIU’s advantage did not deter ODU’s efforts, as the Monarchs made three shots at goal in only three minutes in an effort to get back into the game. Idelys Vazquez made a shot at goal before getting subbed off at half time, but the shot was saved by the Monarchs’ goalkeeper.

The second half started with both teams making multiple substitutions within the span of just eight minutes. ODU was handed two yellow cards, which resulted in additional changes in the lineup.

On minute 63, the Monarchs took a shot at goal, but Vinoly saved the ball once again. After a foul on forward Kédie Johnson on minute 71, FIU decided to make a change by bringing in midfielder Dominique Marcelli.

During the 87th minute, forward Farah El Tayar made the final shot on goal by FIU, which was once again saved by ODU’s goalkeeper. Vinoly saved a goal in the 88th minute. A minute later, the Panther’s midfielder, Laia Muñoz Danon was given a yellow card.

The game concluded only two minutes later, netting FIU its second victory of the season.

“The result against the number one team in the Conference will likely come as a surprise to many. Not to us. Not to those who have been in the fight with us all season long,” said head coach Jonathan Garbar. “ We know our path is one defined and driven by progress. This result doesn’t validate our efforts, it’s simply one more collective experience in our journey, together.”

The Panthers will play their final game of the season at home against the Louisiana Tech Lady Techsters Friday, October 28 at 7pm.