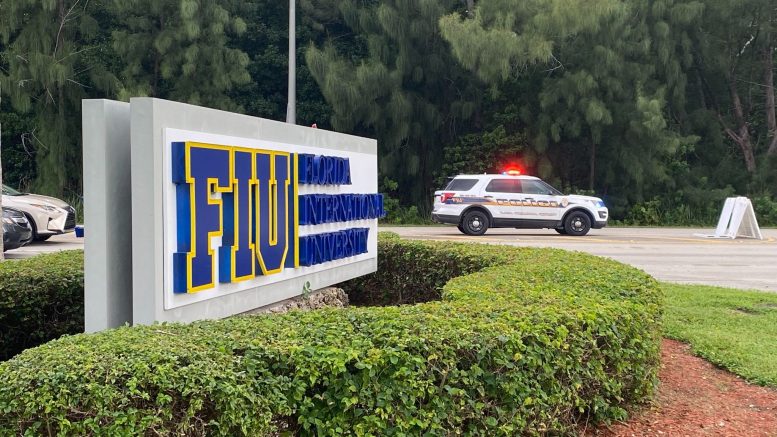 A dead body was found near the entrance of FIU’s Biscayne Bay Campus (BBC) this afternoon, police say.

“The incident is not related to the FIU community,” stated a university-wide email.

A helicopter was seen flying over the area following the incident.

“I was going down Biscayne boulevard and they closed every single lane, they just opened one for traffic and there were like a million cops,” said Nicole Navarro, a hospitality master student that drove past the traffic on her way to campus.

All eastbound lanes heading towards BBC, and one westbound lane exiting BBC remain open, noted the email. However, all lanes could close soon.

“North Miami Police are on the scene and may temporarily close all lanes due to the ongoing investigation,” stated the email.

The death of a construction worker was confirmed on Oct. 26 via a university-wide email.

“North Miami Police and the Occupational Safety and Health Administration (OSHA) continue to investigate the death of a construction worker on Sole Mia Way and Northeast 151 Street,” stated the email.

It is unclear how the victim died.

All areas are now restored as police activity subsided this morning, according to a university-wide email sent on Oct. 28.

“All lanes on Northeast 151 Street near BBC are now open after being partially closed for several days this week due to a construction accident,” stated the email.

The incident was unrelated to the FIU community, the email noted.

A night of music and magic with Iranian musician Hossein Alizadeh

At the Bay, Student Programming Council

BBC’s summer will include smiley faces and bowling pins