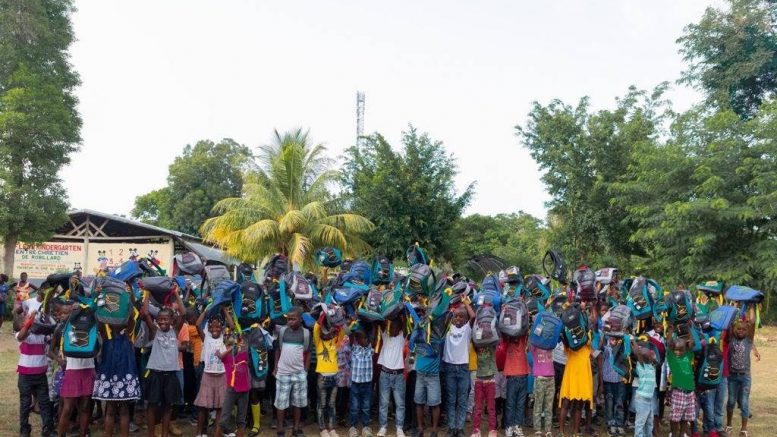 During his childhood in Haiti, Westernior Valmera witnessed kids his age struggling to afford backpacks and other school supplies. Students often had to work with their parents, and abandoned their education.

“I came from a very poor environment, life conditions were never towards our advantage or preference,” said the FIU Political Science doctoral student about his hometown, Plaine-du-Nord, Haiti.

These challenges inspired him to create Haiti-Ed for Kids.

Haiti-Ed for Kids is a nonprofit organization which provides education and economic development for impoverished Haitian communities.

“A better future for Haiti is possible only through better education,” said Valmera. “It would help the state grow and become self-sufficient, so it wouldn’t have to rely fully on other states.”

The 28-year-old student would create the organization in 2017 while completing his bachelor’s degree at Southern Illinois University, Edwardsville. The opportunity to study abroad came thanks to the USAID sponsored Scholarship for Education and Economic Development awarded to Valmera.

“After having so many opportunities in my life, I realized I don’t want to be rich, but instead, what can I do to give back,” said Valmera. “And how can I influence others to make a bigger impact back home?”

Valmera explained how he and the other original five members funded the project out of their own pockets. Their love for Haiti fueled them to make a change in a country where only 53 percent of children complete elementary school, and 34 percent complete secondary school, according to UNISCEF.

“Part of the reason I started the organization without donations is because so many nonprofits around the world have a lot of money, but they’re not doing enough,” said Valmera. “So my team and I began working together to make an impact without external funding.”

From this beginning, Haiti-Ed for Kids has continued to expand, from supplying 25 Haitian students with backpacks in 2017, to supplying 400 students and awarding 33 elementary school scholarships.

The organization also partnered with Haiti Compost Business to educate students in a bid to change Haiti’s skeletal agricultural sector.

“Through educating kids on agriculture, they can practice their own farming and hopefully no longer rely as heavily on the imports of other countries,” Valmera said. “Maybe one day, we can feed ourselves, and actually export as well.”

Haiti-Ed for Kids also created a zero-interest microloan program for small businesses to encourage community development in the nation.

“By providing microloans to parents based around their small businesses, they can expand those businesses, which would absolutely help them be able to support their kids going to school and providing for their needs,” said Valmera.

However, these initiatives would each come with their own challenges such as logistics behind transporting supplies.

“One of the logistical issues right now in Haiti is gas, especially in the countryside where the people are most in need,” said Valmera. “Sometimes the only way you can purchase gas is through the black market, and they sometimes add water to it, which is bad for the engine.”

This month, the organization announced that it had been recognized as a tax-exempt non profit under the U.S. Internal Revenue Service, allowing any future donations to be tax deductible for donors.

Valmera and Haiti-Ed for Kids team excitedly believes this will help expand the programs to new communities in the nation.

“Now that we are recognized by the IRS, we can’t wait to partner with major organizations, and make an even bigger impact,” said Valmera.