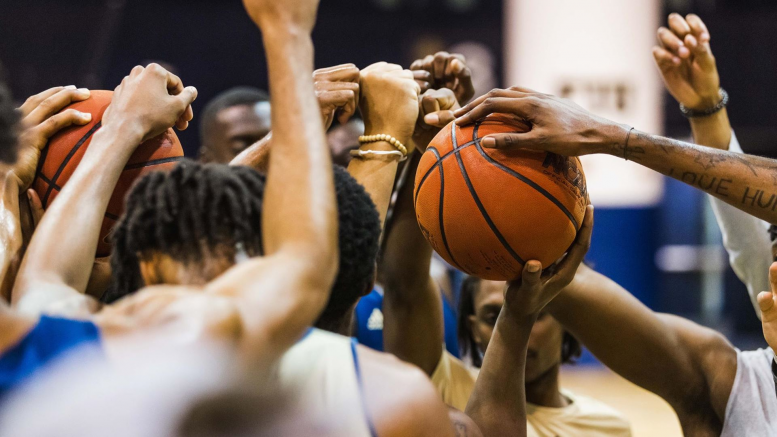 The FIU Men’s Basketball Team in a huddle during practice. Photo by FIU Athletics

As college basketball season begins next month, the FIU men’s basketball team will prepare to have a bounce back year, with the goals of Conference USA and NCAA Tournament appearances.

The Panthers begin their season on November 9, when they go on the road to face the Georgia Bulldogs, and head back to Miami for their home opener on November 12 against Trinity College.

In their 26 games played, the Panthers scored 1,914 points with an average of 73.6 points per game. FIU’s offense was ranked 5th out of the 14 teams in C-USA. Marshall, UTSA, Florida Atlantic, and Rice all led FIU offensively.

Defensively, however, FIU was the worst team in the conference, allowing a total of 1,985 points to their opponents, and 76.3 points per game.

The leading scorer and best overall player for the Panthers last season was guard Antonio Daye Jr, who led the team with 31.7 minutes played and 17.1 points per game, shooting 45.5% from the field and 28.9% from three. Daye was also ranked 6th in C-USA for scoring and 7th for field goal percentage.

However, Daye, Dimon Carrigan, and Bernie Andre have all transferred and are no longer on the roster for the 2021-2022 season. Despite these losses, FIU’s Recruiting Coordinator Jesse Bopp has provided a broad recruiting class that will hope to fill the missing pieces.

There will be many new faces on the court this season, some of which include the likes of guards Denver Jones, Aquan Smart, Dante Wilcox, and Petar Krivokapic. Along with these guards come new forwards CJ Kelley and Mohamed Sanogo.

With the absences of Daye, Carrigan, and Andre, it gives these young players even more of an opportunity to prove themselves on the court. For example, Dante Wilcox, a redshirt freshman, played 25 games making three starts and averaging a surprising 59.2% from the floor last season.

Players like Wilcox already have experience and have shown the potential to become better than what they are. The chemistry of this team will only grow as the season continues.

Leading the Panthers this season is Head Coach Jeremy Ballard. Ballard joined the Panthers in 2018 and has been coaching ever since. Ballard has ‘established a new culture of winning’, and it is shown throughout the past few years. In Ballard’s first season, he led the team to a 20-14 record, with a 10-8 record against C-USA opponents.

The team’s 20 wins marked the third time in school history that FIU logged 20 or more victories and were tied for the second most in a single season, while the 10 C-USA wins was the most since joining the conference back in 2013.

Along with the Head Coach is the Associate Head Coach, Jesse Bopp, and two Assistant Coaches, Joey Rodriguez and Zavier Anderson.

With new players coming in and out, these coaches needed to adapt fast, and they’ve done just that. With this new lineup of players, FIU has a fresh start, and hopefully can get back on track after last year’s stumble.

The Panthers kickoff their season against the Georgia Bulldogs in Athens, Georgia on November 11t at 7PM. The Bulldogs went 14-12 last season and 7-11 in their conference games. Given that the SEC is a more competitive environment, it will be a difficult first game for the Panthers, but we get to see their true skills when going up against a tougher opponent.

The Panthers have their home opener against Trinity College on November 12 at 7PM. Trinity College finished with a solid record last year, going 17-9 overall and 6-4 in their conference. Trinity scored 82.7 points per game whereas FIU scored 73.6. On paper, it seems like an even matchup, but that can all change when the players step on the court.

The Jersey Mike’s Classic is a three day tournament in which six different schools compete in a mini-tournament, starting on November 18th. FIU first plays the Ball State Cardinals on November 18. Ball State, a team that went 18-13 overall in their last season, is a fairly even matchup for FIU, scoring 67.7 points per game and only giving their opponents 63.5 points per game.

FIU’s next matchup is against the Wisconsin-Green Bay Phoenix. This matchup is a bit more difficult as Green Bay went 17-16 last season, scoring a staggering 80.1 points per game. This is definitely going to be a more powerful offense that the Panthers are going up against.

FIU’s last matchup is against the UNC Greensboro Spartans. UNC Greensboro, fresh off their conference championship and NCAA Tournament appearance, are a much more skilled and experienced team. Finishing with a 21-9 record and taking on FSU in March Madness, the Spartans have shown no signs of slowing down.

FIU has a lot of competition in this three day tournament. These games, while not being a part of their conference games, still are huge games for FIU, and a win in any of these games can mean a lot for the team moving forward.

FIU takes on Old Dominion in their first conference game of the season. This game will mark the first step FIU will take to the C-USA tournament. This game is also the start of conference play, meaning all the games after this one are against conference opponents. This season however is bittersweet for the C-USA, as many teams will be exiting and joining other conferences in the following years.

Regardless of that, ODU had one of the C-USA’s worst offenses last season, with a fairly good defense. This game seems like an even matchup for the Panthers, especially with the addition of new players.

The Panthers face the two Texas powerhouses in the Lone Star State, against the Texas-San Antonio Roadrunners and Texas El-Paso Miners. UTSA’s offense is similar to FIU’s, only putting up 78.8 points per game last season to FIU’s 73.6. Their defense struggled, similar to that of FIU’s, overall an even matchup between the two.

Down in El Paso however, things aren’t as close. FIU has struggled tremendously against UTEP in their last 10 matchups, going 2-8 to the Miners, and playing away will be no advantage. On the road, the Panthers are 1-6 to the Miners. UTEP has had FIU’s number for the past few years, but the Panthers have what it takes to turn it around this year.

The Panthers go up against the Owls two times this season, and both games are back to back to close off the season. The first game is on March 3 at 7PM at home, and the second is on March 5 at Boca Raton. Last season, the FIU V. FAU doubleheader resulted in a sweep for the Owls.

The Panthers have lost the last two meetings to the Owls, one 63-107, the other 79-81, but have beaten FAU three times in the last five matchups. The rivalry between the schools is strong, and it’s not slowing down this year.

The C-USA tournament begins on March 9 through the 12. Depending on how FIU plays this year, they could potentially make a push for the championship. In last year’s final, North Texas beat WKU in OT 61-57 to take the Conference USA Championship down to Denton, Texas.

Expectations are always high for collegiate sports, and Coach Ballard and his team have proven that they have what it takes. A bump in the road last season isn’t going to dictate the future of this team. This season, just like every other, is important for FIU, and if they come out of the gates strong and explosive, they can really make a name for themselves in this conference.