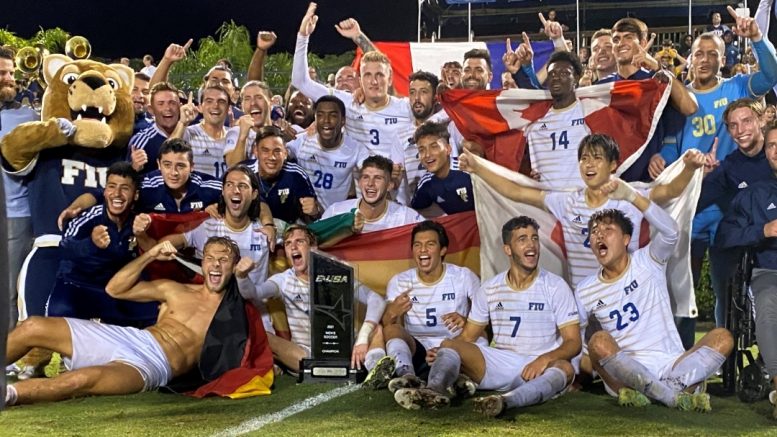 The Panthers finished the regular season with a record of 12-2-2 and finished with the best record in the conference at 7-0-1. Winning at home again, the Panthers posted a perfect 7-0-0 record at the FIU Soccer Field.

Head Coach Kyle Russell spoke about the atmosphere at the game and how important it was to knock off the best team in the country to win the title at home in a postgame interview.

With packed stands and tensions high as soon as the first whistle blew, the intensity of the game was on display as both teams came out with high pressure. In the first five minutes FIU fired off three shots, setting the tone for the remainder of the half. Despite the pressure Marshall had the best chance of the opening ten minutes after hitting the crossbar in the 7th minute.

The Herd continued their pressure and got the breakthrough moments after hitting the bar. In the 13th minute the Thundering Herd were awarded a penalty that they converted to make it 1-0. Unphased by the early goal, the Panthers battled back and in the 17th minute midfielder Maruo Bravo fired FIU level sending the crowd into a frenzy.

Building off their momentum from the goal, the Panthers continued to put pressure on the opposition’s goal, sending four more shots at the Herd in ten minutes. Marshall sprung a few counter attacks after absorbing the FIU pressure and started to take control of the match.

The Herd thought they had taken the lead once again in the 31st minute, but defender David Garcia made a heroic goal line clearance to keep the ball out of the net and the score level at one.

In the 35th minute midfielder Matis Baraza put in a perfect corner kick that forward Rasmus Tobinski headed into the far corner to take a 2-1 lead. FIU kept their foot on the gas for the rest  of the half and when the halftime whistle blew the score remained 2-1.

As the whistle sounded for the start of the second half,  the Panthers continued to maintain their high pressure. In the 50th minute, FIU doubled the lead after an errant goal kick from Marshall. Defender Kareem Riley intercepted the ball and played it to forward Stephen Afrifa who beat his man with a fake shot and slotted the ball into the bottom corner.

At the hour mark it went from bad to worse for the Herd as they received a red card, giving FIU the man advantage for the final 30 minutes. Controlling the flow of the game for the final half hour, the Panthers added another goal in the 79th minute. Midfielder Matteo Gasperoni reacted quickest to a loose ball in the box and fired it into the top corner to take a commanding 4-1 lead.

The Panthers kept momentum for the rest of the second half, and as the final whistle blew, FIU claimed its first regular season conference title since 2017

FIU outshot Marshall 24-11 and controlled the ball for the majority of the game. Russell spoke about the performance of the FIU squad and the heart they showed in the match.

“We compete in every game as if every game is a championship game, so this was nothing new for us,” Russell said. “We’ve been training for this moment for so long, it was so amazing, I’m so proud of the guys.”

On the horizon for the Panthers is the C-USA championships in Charlotte, North Carolina, starting Wednesday, November 10. Because they won the regular season title, the Panthers will receive a first round bye and will play their first game on Friday, November 12.

“This is one trophy, we’re here for three, I don’t want one, I want three,” Russell said. “Tonight we celebrate one and tomorrow we wake up and regroup on how we can execute getting our second trophy in the conference tournament.”